Orlando's new coach has a reputation as a defensive wizard with offensive shortcomings. A look at his prior teams supports that theory.

Share All sharing options for: A visual look at Scott Skiles' coaching history

When the Orlando Magic hired Scott Skiles as their new head coach on May 29th, they absolutely knew what they were getting, and I don't say that simply because of his close ties to the organization as a former player: Skiles' 876 games as a coach make him the most experienced helmer the team has hired since Chuck Daly.

With that experience comes a reputation, which in Skiles' case means defensive excellence. For a Magic squad which underachieved on that side of the ball a season ago, that expertise is welcome. Yet he has, throughout his 13 years of coaching at the NBA level, only presided over two teams which ranked better than league average offensively. One of those two occasions marked his first season in the NBA; in the other, with the Milwaukee Bucks in the 2011/12 campaign, he finished below-average defensively. 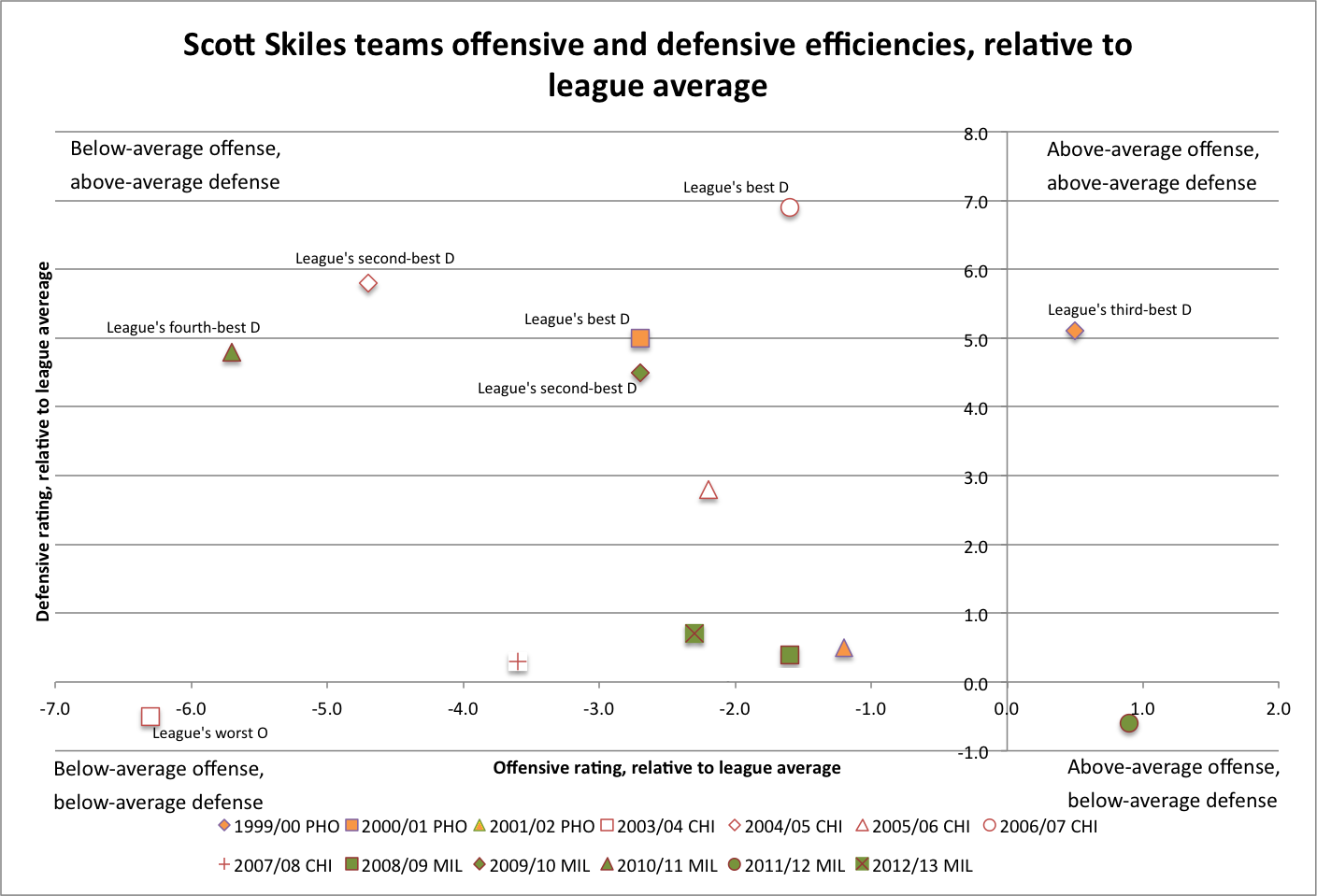 Skiles' defensive acumen is beyond reproach: on two occasions his teams have led the league in defensive efficiency, and overall he boasts six top-four defensive finishes.

It's fair to wonder whether Skiles will, over the course of his Magic tenure, boost his team to offensive respectability. His poor track record at that end suggests not, which helps one understand why the likes of Kevin Pelton and Kelly Dwyer were less-than-impressed when the Magic tabbed Skiles to replace Jacque Vaughn and interim coach James Borrego.

In recent weeks, since rumors of Skiles' hiring first began circulating, Magic fans have called time and again on this story Zach Lowe published on Grantland shortly after Skiles left the Bucks. In it, Lowe credits Skiles for "retool[ing]" his offense to suit his personnel over the course of his coaching career. That history of innovation ranks as a positive, but probably not to the degree Magic fans might have held: after all, how great can a new process be if it still produces mediocre results?

And yet: I can't help but circle back to the enormous positive Skiles' history, illustrated here, highlights: the 2015/16 Magic ought to be better-than-solid defensively. His history of defensive excellence; in combination with willing and talented individual defenders like Elfrid Payton, Victor Oladipo, and Aaron Gordon; points to a brighter future in Orlando. Even if he and his players never quite figure out how to best use their offensive gifts, the team will nonetheless be more competitive. For an Orlando franchise which has managed the league's worst win percentage over the last three seasons, simply competing on a nightly basis would rank as a welcome improvement.

The author consulted basketball-reference.com in writing this story.