Willie Cauley-Stein not a fit with the Orlando Magic

While the Kentucky big guy is going to be a formidable player in the NBA, he might not be the right choice for the Magic at fifth in the draft.

Share All sharing options for: Willie Cauley-Stein not a fit with the Orlando Magic

With the 2015 NBA Draft rapidly approaching, many turn their attentions to the top collegiate and international players vying for a spot on an NBA roster. For the Orlando Magic, a third straight year with a top-five selection leaves many of their fans hoping for the final piece to the puzzle that general manager Rob Hennigan has slowly constructed. After falling in the previous two lotteries, the Magic stayed put in 2015, being awarded the fifth overall pick in May's Draft Lottery.

While the team has some promising young talent -- most notably in the backcourt with Victor Oladipo and Elfrid Payton -- they still lack, arguably, the two most important pieces in today's ever-evolving NBA: a rim protector and three-point shooting.

Sitting with the fifth pick in the draft, the Magic have the chance to potentially address one, if not both, of those needs. However, one of the players who would improve them dramatically in one area would hurt them almost equally as much in the other.

Kentucky's second marquee big man in the draft, the lanky 7-foot Willie Cauley-Stein, projects to be one of the top defensive players selected on June 25th, if not the best. Many mock drafts have had Cauley-Stein in the running for the Magic with the fifth pick, while many fans have anointed him as the player the team must select once Orlando is on the clock. While the former Wildcat would undoubtedly fit with the Magic, at least to an extent, he'd also be a large hindrance.

In his three years with the Wildcats, Cauley-Stein showed off his great defensive instincts, guarding all five positions and using his athleticism to wreak havoc all over the court. While his defense is extremely far ahead of that of his peers, he's very limited on the offensive end, and for a team like the Magic with enough problems on that end due to their lack of shooting, adding Cauley-Stein would be the wrong move.

Last season, the Magic shot a pedestrian 34.7 percent from three as a team, good enough for a tie for 15th with the lowly New York Knicks. Moreover, their spacing, even with free agent acquisition Channing Frye, was terrible throughout the season. Adding a player like Cauley-Stein, who can only score around the rim, would kill their already poor spacing even more.

Why Justise Winslow is a perfect fit for the Magic 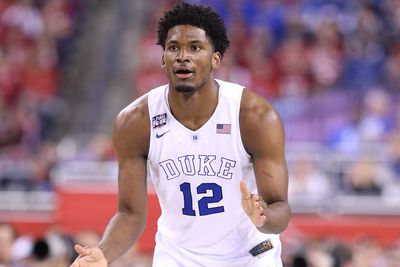 Yes, the Magic were much worse defensively last season -- they finished 25th in the league in defensive rating -- but should see improvement with Scott Skiles running the show. Skiles, whom the team hired as coach on May 29th, has a great history of having good defensive teams, with none of his teams finishing with a defensive rating worse than 16th in his 13-year coaching career.

With Skiles at the helm and the team having drafted for D over the last three seasons, going with a more offensive-minded player might be their best move in 2015. While Skiles-led teams have flourished on the defensive end, they've struggled almost equally as much offensively, so adding another key component on that end could be the best option for the Magic.

Cauley-Stein is undoubtedly going to be a fantastic player in this league, especially if he's put in the right situation right off the bat. However, with the Magic's needs in other areas as well, he doesn't fit as well in Orlando as much as like Latvia's Kristaps Porzingis, Croatia's Mario Hezojna, or Duke's Justise Winslow may have.