Magic will make Kyle O'Quinn a restricted free agent in 2015, according to report

Despite his diminished playing time of late, Orlando will make sure it has the right of first refusal on Kyle O'Quinn when he hits free agency.

Share All sharing options for: Magic will make Kyle O'Quinn a restricted free agent in 2015, according to report

The Orlando Magic will extend to Kyle O'Quinn a qualifying offer to make him a restricted free agent, reports Josh Robbins of the Orlando Sentinel, despite the 25-year-old big man's decline in minutes as the season has progressed. 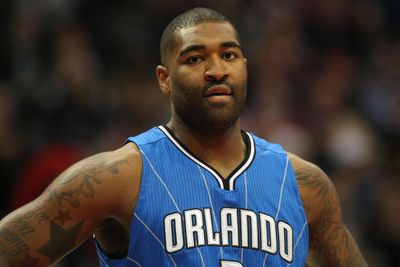 In late March, OPP examined how O'Quinn's role with Orlando has diminished as the season has progressed.

Though interim coach James Borrego has played O'Quinn far less often than Jacque Vaughn, his predecessor, did--Borrego appears to value more highly Dewayne Dedmon's athleticism and shot-blocking--O'Quinn remains a valuable asset as a third or fourth big man, one who can pass, shoot from mid-range, and defend with physicality.

As such, keeping him under team control makes a great deal of sense. O'Quinn will likely net free-agent offers in the mid-level exception range, a price point which could give Rob Hennigan, Orlando's general manager, pause. Yet retaining the right of first refusal on a bargain pickup--Hennigan selected O'Quinn 49th overall in the 2012 NBA Draft--as he hits free agency is a smart move for a team still lacking talent.

Nonetheless, Dedmon's emergence has underscored the wealth of options Borrego, or whomever the team tabs to replace him over the summer, has at the power positions. In addition to Nik Vučević, who has developed into an All-Star-caliber anchor at center, Orlando boasts three-point ace Channing Frye, the energetic Dedmon, the physical O'Quinn, and the high-scoring mismatch-creator Tobias Harris. Aaron Gordon has spent the bulk of his rookie season at small forward, but figures to play as more of a gadget forward long-term.

Hennigan will have to weigh those players' skills against the salary-cap sheet when making several difficult choices in the summer ahead, and O'Quinn isn't even his highest priority; Harris stands an outside chance of inking a max or near-max offer sheet, and Orlando is not in position to let players of Harris' caliber walk away.

A savvy team in need of frontcourt depth would be wise to sign O'Quinn early in free agency while Orlando figures out what to do with Harris, potentially forcing it to choose between the two young bigs.

O'Quinn has made 50 appearances for the Magic in his third season, averaging 5.7 points, 3.8 rebounds, and 1.1 assists while shooting 48.7 percent from the floor.