The likes of Dewayne Dedmon and Andrew Nicholson appear have overtaken O'Quinn in Orlando's rotation.

In his first 16 appearances of the 2014/15 campaign--which included nine starts--Kyle O'Quinn averaged 9.2 points and 5.5 rebounds per game, shot 51.8 percent from the floor, and tallied three double-doubles. He went on to start eight more games for the Orlando Magic, contributing precious little--he never cracked double-digit scoring or rebounding in any of those contests--and then essentially disappeared from the face of the earth.

Indeed, the Norfolk State product has seen his minutes and role fluctuate throughout his third professional season. And as Josh Robbins of the Orlando Sentinel writes, that instability comes at a most inopportune time: O'Quinn is set to become a free agent in July, and his lack of consistent playing time could affect his payday. 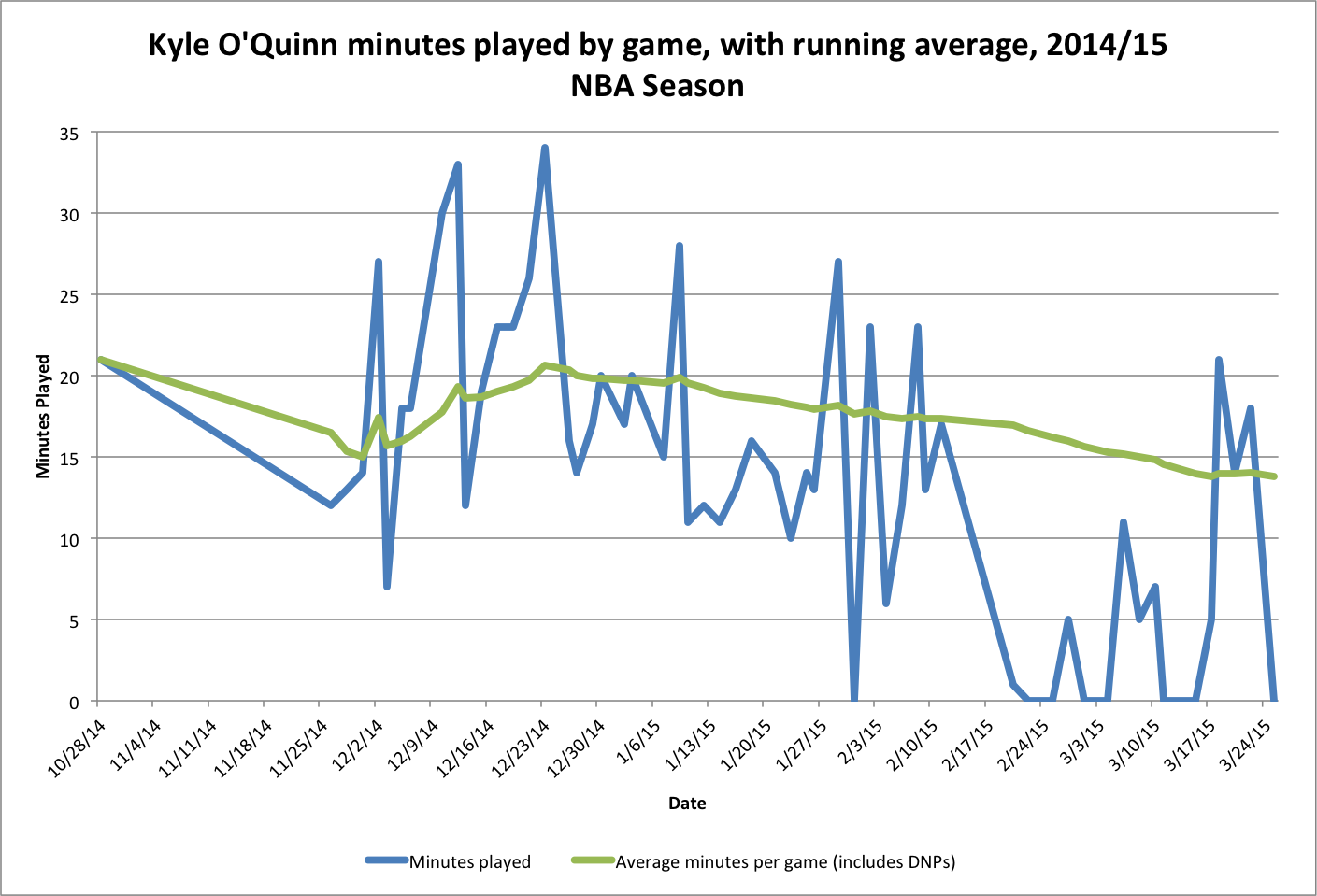 How far has O'Quinn's stock dropped? When Dewayne Dedmon, the undrafted journeyman who has claimed the starting power-forward job which used to belong to O'Quinn, missed three recent games due to a sprained ankle, O'Quinn didn't even sniff a start in his place: instead, coach James Borrego, who took over for Jacque Vaughn on February 5th, called upon Channing Frye and the little-used Andrew Nicholson instead. O'Quinn came off the bench in those games, shooting only 42.1 percent from the floor for a workmanlike seven points and four boards in 17.4 minutes. When Dedmon returned Wednesday against the Atlanta Hawks, O'Quinn earned yet another Did Not Play-Coach's Decision.

The chart embedded in this post illustrates O'Quinn's sharp decline in minutes as the season has progressed. Counting games for which he picked up a DNP-CD, O'Quinn's average minutes per game has dropped from a peak of 20.9 to a nadir of 13.8.

Before he hits free agency for the first time in his career, O'Quinn has nine games with which to re-establish himself. For the moment, Orlando seems content to keep rolling with Nikola Vucevic, Dedmon, Frye, and Nicholson ahead of him in the playing rotation. O'Quinn's overall body of work suggests he's better than a fifth big, especially on a rebuilding squad, but his uninspiring recent performances have nonetheless left him on the fringes of the rotation.