Watch: Victor Oladipo slams in the Magic's first alley-oop of the year

Arron Afflalo connected with the Magic rookie in the third quarter of Wednesday's win over Charlotte.

Share All sharing options for: Watch: Victor Oladipo slams in the Magic's first alley-oop of the year

It took the Orlando Magic 21 full games and two quarters of another to finally get their first alley-oop dunk of the 2013/14 season, but, as the expression goes, better late than never. Video of the play is embedded in this post. 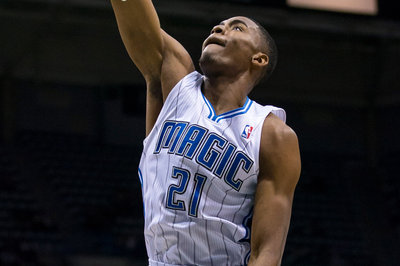 In the first year of its rebuild, Orlando had fewer alley-oop slams than all but five teams. Here's a look at each jam.

Arron Afflalo and Victor Oladipo connected in the third quarter of Wednesday's win against the Charlotte Bobcats. Afflalo, handling in transition on the left side of the floor, spots the streaking Oladipo on the right side. With no Bobcat impeding his path, Oladipo explodes to the rim and takes flight just outside the restricted circle. He catches Afflalo's lob pass and throws it down with two hands.

It's appropriate that Oladipo would convert Orlando's first alley-oop dunk of the season against Charlotte: Michael Jordan owns the Bobcats, and Oladipo signed a contract to wear Jordan's shoes.

Magic at Bobcats: Will skid stop in Charlotte?