For Magic, Serge Ibaka's recent play could be cause for concern

Ibaka's performance in recent years, though solid, isn't quite up to expectations. Did the Magic overpay in trading for the 26-year-old, or is there another explanation for his decline?

Share All sharing options for: For Magic, Serge Ibaka's recent play could be cause for concern

Thursday night, the Orlando Magic made their most significant personnel move since trading Dwight Howard in the fall of 2012, acquiring Serge Ibaka from the Oklahoma City Thunder. Orlando paid a steep price for the rim-protecting big man: the deal cost it the 24-year-old combo guard Victor Oladipo and the productive veteran Ersan Ilyasova as well as the Draft rights to Domantas Sabonis.

Complete coverage of Ibaka trade: Deal is official Will: What Ibaka brings Evan: Is he on the decline? Zach: A calculated risk Cory: What will the Magic gain?

Ibaka has enjoyed a distinguished seven-year career with OKC: although he has never earned All-Star or All-NBA honors, Ibaka is a three-time selection to the All-Defensive First Team. Further, he won't turn 27 until September. It's easy to see what drew the Magic to him, especially when one considers the weakness of their interior defense over the last several seasons.

And yet Ibaka's recent performance suggests he may have already reached his zenith.

Ibaka's coming off a season wherein he posted per-game averages of 12.6 points, 6.8 rebounds, and 1.9 blocks in 32.1 minutes. Those numbers are solid, if not spectacular, for a floor-spacing four in a complementary role.

But his per-game numbers don't tell a complete story. Indeed, some key markers indicate Ibaka may have already peaked.

A decline in these markers--usage, rebounding, blocks, foul-drawing--tends to point toward a decline in skill and productivity. So if you take an alarmist view of this deal--and many Magic fans have--those numbers only stoke your concern.

The more optimistic view goes something like this: rather than indicating decline, the numbers suggest a player adjusting to a different role. In his first three seasons, Ibaka attempted six triples, a negligible percentage of all his shots. He began expanding his range over the next two seasons, hoisting 117 treys, accounting for 6.7 percent of his shots. 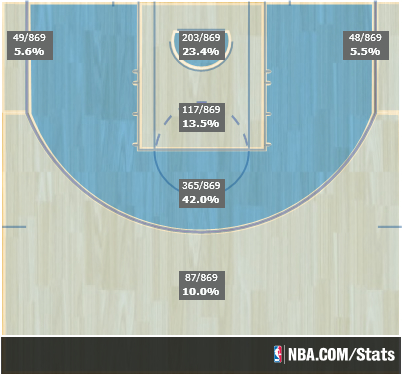 And then Ibaka really began to open things up. In his two most recent seasons, threes have accounted for 23.5 percent of his shots, with mixed results. Two seasons ago, he connected on 37.6 percent of his three-pointers. In 2015/16, that number dipped to 32.6 percent.

Even with the mixed results, it's easy to understand why Ibaka expanded his range. Russell Westbrook and Kevin Durant need space to attack the lane, and they need a pass target available if defenses overload them. Ibaka's becoming a catch-and-shoot specialist at power forward--among players 6-foot-10 or taller, only Dirk Nowitzki took more jumpers per game off the catch than Ibaka did a year ago, according to NBA.com/stats--fills that need.

Ibaka will never be a featured offensive player, but one has to believe he'll get more touches in Orlando than he ever could have dreamed of in OKC. And the work new Magic coach Frank Vogel did turning Ian Mahinmi into a top-notch finisher and capable passer in pick-and-roll situations--Zach Lowe covered this subject in his NBA awards ballot--suggests Orlando is capable of getting creative with how it uses its new power forward.

What I can't reconcile is the decline in blocks. Ibaka's 4.5-percent block rate is still elite--it ranked 10th in the NBA among qualified players--but it still represents a 50-percent decline over five years. And while we acknowledge there's more to defending than simply blocking shots, that number's dropping so precipitously raises some concerns.

Rob Hennigan and his mates in the Magic front office know all of this stuff, of course. They watch the games and pore over the numbers. They know, and they made the deal. Which of course suggests a degree of confidence in their ability to get Ibaka to return to form. And in conjunction with their other big offseason move, hiring the well-regarded Vogel, it also suggests they are sick of losing. If you trade a 24-year-old former number-two Draft pick for a veteran of Ibaka's caliber, you do it to punch a playoff ticket, not a lottery one. Ibaka's overall body of work indicates he can help Orlando accomplish that goal. But based on his more recent performance, it's more than fair to react dubiously to this trade.