One of the most exciting nights in the NBA calendar has arrived. Here's how you can catch all the action.

Less than a week after the Cleveland Cavaliers secured the NBA championship, the sports world returns its eyes to the Association on Thursday for the NBA Draft. 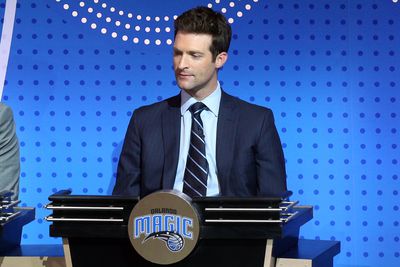 ESPN will broadcast the event live from the Barclays Center beginning at 7:00 PM Eastern. Rece Davis will anchor the coverage alongside analysts Jay Bilas, Jalen Rose, and Michael Wilbon. In addition, ESPN analysts Tom Pen and Fran Fraschilla will add their commentary from a second set inside Barclays. Fans can tune in to ESPN via their television or the WatchESPN app.

If ESPN isn't your flavor, that's okay. Adrian Wojnarowski is anchoring his own NBA Draft show on The Vertical. That live webcast will start at 7:00 PM Eastern in this space.

The Orlando Magic hold the 11th, 41st, and 47th overall selections in Thursday's Draft. Their first-round choice is their lowest since 2012, when they selected Andrew Nicholson 19th overall.

Use the comments section of this post to record your thoughts live with the Draft. We'll have updates on Orlando's selections throughout the evening.