The Magic big man almost had a 20-20 night, but his performance wasn't enough to lift Erie past Westchester.

Share All sharing options for: Dewayne Dedmon dominant as BayHawks lose to Knicks

The Orlando Magic sent Dewayne Dedmon to the Erie BayHawks, their NBA D-League affiliate, to get him some playing time over their idle weekend. And while Erie fell to the Westchester Knicks, 98-94 on Saturday, it wasn't due to a poor showing on Dedmon's part.

Catching up with the BayHawks 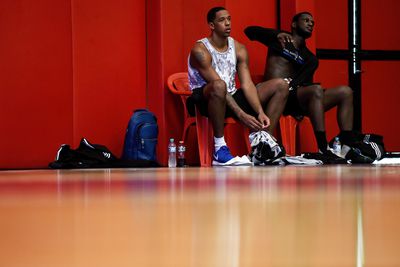 Zach chats all things BayHawks with Chris Reichert, a D-League expert who writes for Upside and Motor.

The third-year center shot 7-of-13 from the floor and 3-of-3 from the foul line en route to a 17-point, 22-rebound, three-block night. He posted those numbers in 35 minutes of action starting at power forward alongside Nnanna Egwu, a former Magic training-camp invitee, at center. Branden Daweson led the BayHawks with 22 points off the bench. Tyler Harvey, the Magic's second-round selection in the 2015 NBA Draft, scored seven with three boards and two dimes off the bench.

Ultimately Erie couldn't contain Knicks guard Travis Trice II, who popped off for 29 points on 8-of-15 shooting. The defeat drops them to 11-28, the worst record in the D-League.

As Josh Robbins of the Orlando Sentinel notes, Orlando is expected to recall Dedmon prior to Monday's game against the Golden State Warriors. In 38 appearances, including four starts, the 26-year-old has averaged 3.4 points, 3.1 rebounds, and 0.8 blocks in just 10.2 minutes per game.