Pau Gasol and Spain dashed France's hopes of capturing EuroBasket gold on Thursday, rolling to an 80-75 overtime victory and setting up a final against the victor of Friday's match between Serbia and Lithuania.

Magic need to extend Fournier while they can 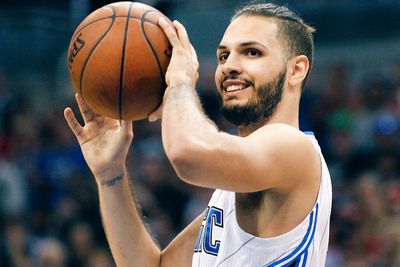 Zach Oliver explains why Orlando ought to make a long-term commitment to Fournier.

Orlando Magic wing Evan Fournier played a minor role for France in the loss, shooting 1-of-2 from the floor for three points in six minutes. His night got off to a nice enough start as he drained a three-pointer 17 seconds after checking in, but he committed three personal fouls, including two within seven seconds of each other on the same second-quarter possession. Coach Vincent Collet pulled Fournier from the game at the ensuing dead-ball and would not call upon him again until the second half, wherein Fournier would log another minute before exiting.

Gasol led Spain with a whopping 40 points on 12-of-21 shooting from the floor and 16-of-18 shooting from the line. He drew 11 fouls. Meanwhile, Spain's defense limited French standouts Tony Parker and Nicolas Batum to a combined 7-of-31 (22.6 percent) shooting.

The loser of Friday's Serbia/Lithuania tilt will take on Fournier and his countrymen for third-place honors.

Fournier will soon enter his second season with the Magic.