Duke center Jahlil Okafor edged Kentucky big man Willie Cauley-Stein for the second spot in the community Draft board. Whom will Magic fans choose at no. 3?

The NBA Draft is nearly upon us, so what better time to gauge the Orlando Pinstriped Post community's ranking of favorite prospects? That's right: the OPP community Draft board has returned. 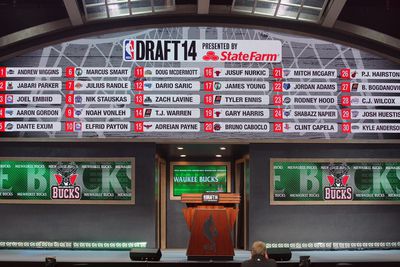 In his freshman season, Okafor dominated in the post for the Blue Devils to the tune of 17.3 points, 8.5 rebounds, 1.3 assists, and 1.4 blocks in 30.1 minutes. Most impressively, Okafor shot 66.4 percent from the floor, using a refined back-to-basket game and his 6-foot-11, 270-pound frame to overmatch his collegiate opponents.

Okafor will certainly be off the board when the Magic pick fifth overall, which is probably just as well for Orlando: he'd make an awkward fit next to Nikola Vucevic, who already stands as the Magic's go-to post scorer.

In the poll attached to this post, please vote for the NBA Draft prospect who should rank third on the Magic's Draft board. We acknowledge that the Magic won't pick until fifth, but we nonetheless want to gauge which Draft prospects Orlando fans value most highly, regardless of their team's Draft position.

Having reiterated the rules, let's vote! The poll closes at midnight Tuesday. We'll reveal the winner and keep the voting rolling daily as often as we can leading up to the Draft on June 25th.