Orlando Magic willing to spend big for Tom Thibodeau, according to report

Orlando is reportedly ready to make the highly-regarded coach one of the highest-paid at his position in the NBA, provided he can secure his release from the Bulls.

Share All sharing options for: Orlando Magic willing to spend big for Tom Thibodeau, according to report

If one believes a new report about the Orlando Magic's interest in Tom Thibodeau, the team is absolutely committed to making him its next head coach.

Citing "two NBA officials," Racine Journal-Times scribe Gery Woelfel writes that the Magic are willing to pay Thibodeau between "$7 million to $9 million annually." In addition, says Woelfel, Orlando may give Thibodeau some input on personnel matters.

Which coaching gig is more attractive? 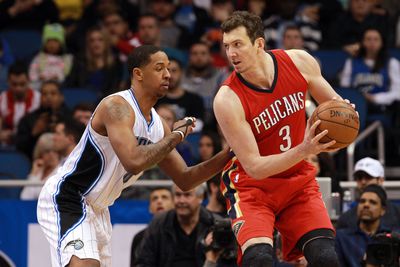 With the Pelicans firing their coach, many fans have wondered if their vacancy is more attractive than the Magic's. Zach Oliver digs deeper.

It bears noting here that the Magic in April extended the contract of Rob Hennigan, their general manager. Thus if the Magic were to bring Thibodeau aboard, he would not have both coach and GM titles, as Doc Rivers does with the Los Angeles Clippers and Stan Van Gundy does with the Detroit Pistons.

Thibodeau has two seasons remaining on his contract with the Chicago Bulls, whom he's guided to five consecutive playoff berths and with whom he won Coach of the Year honors in 2011. But tensions between the coach and Chicago's front office have run high over the past several years, and as Woelfel writes, the "differences" between the two parties "are irreconcilable."

Thibodeau's NBA coaching record stands at a sterling 255-139 (.647). Among coaches with a minimum of 300 games of experience, that winning percentage ranks sixth in NBA history.

The only three coaching vacancies in the NBA belong to Orlando, the Denver Nuggets, and the New Orleans Pelicans.