Scott Brooks might not be the best fit for Magic coach

Brooks, whom the Thunder recently fired, is a hot name in Magic coaching rumors.

It didn't take long for Scott Brooks' name to come up in discussions of candidates for the Orlando Magic's coaching vacancy.

After seven seasons, the Oklahoma City Thunder officially parted ways with Brooks on Wednesday. The former journeyman guard compiled a 338-207 (.620) record at OKC's helm and guided it to an NBA Finals appearance in 2012, where it fell to the Miami Heat in five games. He also earned Coach of the Year honors following the 2009/10 campaign, his second with the Thunder, during which the team more than doubled its win total by tallying a 50-32 record.

Citing "league sources," Yahoo! Sports scribe Adrian Wojnarowski reported Wednesday, shortly after Brooks' dismissal, that the 49-year-old would "immediately become a top candidate" for the Magic and the Denver Nuggets. Similarly, Marc Stein of ESPN.com reported that Brooks is an "instant candidate" for those same vacancies.

Those two voices aren't alone. Sports Illustrated's Chris Mannix said Orlando is a "natural landing spot" for Brooks because of his "player development skills." Zach Lowe of Grantland used similar language, saying Brooks is a "natural candidate" in Orlando, though he rightly pointed out the Magic may need someone with a better offensive résumé.

I find myself agreeing with Lowe and generally holding a skeptical view of Brooks' candidacy. Yes, Brooks indeed has ties to the Magic--their general manager, Rob Hennigan, was part of the Thunder organization when it hired Brooks--and owns impressive credentials, both of which facts work in his favor. But through no fault of his own--he didn't assemble OKC's roster, after all--the sheer talent he had at his disposal with the Thunder complicates the task of evaluating his performance. Did the Thunder succeed because of Brooks or despite him?

Other questions remain about Brooks: his longstanding affinity for playing Kendrick Perkins, despite the aging bruiser's waning skills and impact, became something of a running joke among NBA observers. And while he certainly deserves some measure of credit for the gains Reggie Jackson and Steven Adams made under his watch, he by the same token must take some measure of blame for failing to develop Jeremy Lamb and Perry Jones III. 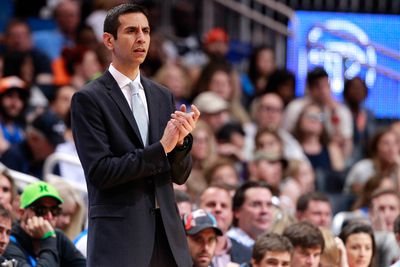 Zach Oliver dishes on Borrego's assessment of his Magic tenure and his pitch for remaining their coach.

That point is an important one: fans and analysts who favor Brooks cite his strong record of developing young talent, a coaching skill Orlando certainly needs as it continues its rebuild. But I'm simply not sold on Brooks' player-development résumé, not after Lamb and Jones failed to become rotation-caliber players. The Magic need someone who can harness the potential of Victor Oladipo and Elfrid Payton, someone who might be able to help Moe Harkless and Andrew Nicholson return to the form they showed earlier in their careers. And nothing I've seen from or heard about Brooks indicates he's entirely up to those tasks, or the myriad others the Magic position requires.

Orlando fired Jacque Vaughn in February and replaced him with James Borrego, who had the team playing harder and more cohesively down the stretch. Borrego did well under difficult circumstances and seems to have the trust of his players, but while Hennigan said Borrego will get a chance to remove the interim label, it seems like a foregone conclusion that he'll ultimately tab a new coach with more experience. Brooks certainly fits that bill, but so do many of the other coaches on the market.

What do you make of Brooks' potential candidacy?