Magic rumored to have interest in Billy Donovan for coaching vacancy, according to report

The longtime Gator coach could become a target of Orlando's once the offseason begins.

Share All sharing options for: Magic rumored to have interest in Billy Donovan for coaching vacancy, according to report

In 2007, the Orlando Magic hired Billy Donovan as their head coach. Eight years later, they may try to do so again.

What is Donovan's future? 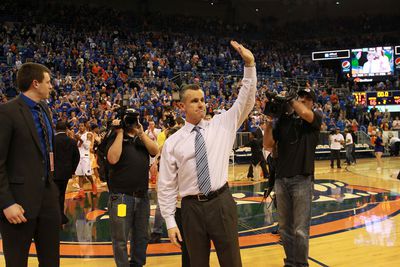 Andy Hutchins of Alligator Army wonders if Billy Donovan will ever take advantage of the many opportunities he'll have to leave Florida.

According to Marc Stein of ESPN.com, citing "sources," the Magic are among several NBA teams who "plan" to target Donovan to be their next head coach. Though Donovan recently signed an extension to keep the Florida Gators' head coach through 2020, Stein reports the new pact has a $500,000 buyout.

James Borrego is currently serving as the Magic's interim head coach, owning a 7-16 record in relief of Jacque Vaughn, with whom the team cut ties on February 5th. Vaughn owned a 58-158 (.269) record in two-plus seasons at the Magic's helm.

On May 31st, 2007, Orlando hired Donovan to replace Brian Hill as coach. Six days later, it released Donovan from his contract, enabling him to return to Florida. The very next day, the Magic inked Stan Van Gundy as their new coach.

In 19 seasons with the Gators, Donovan has compiled a 467-186 (.715) record and won two NCAA Championships. The Gators finished the 2014/15 season at 16-17, their worst showing since their second season under Donovan.