Orlando remains in the league's fifth-worst slot, but could improve if it maintains its winning ways.

Share All sharing options for: Magic's recent wins threatening to pull them out of NBA standings cellar

The Orlando Magic's stirring 103-98 victory over the Boston Celtics on Sunday improved them to 21-43 on the season and gave them their second straight win, but they remain in sole possession of the NBA's fifth-worst record. Only the New York Knicks (12-49), Philadelphia 76ers (14-49), Minnesota Timberwolves (14-47), and Los Angeles Lakers (16-46) are worse. And L.A. owns a four-game "lead" over the Magic in the NBA's Draft Lottery order. With 20 games left in the Lakers' schedule, and 18 in Orlando's, "catching" Hollywood may prove a difficult task.

Magic's wins could cost them in Draft 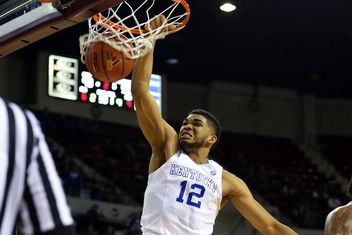 Matt Graber wonders if Orlando might be playing itself out of the chance to draft a foundational player in June.

And while Orlando has maintained the league's fifth-worst record for a while now, it continues to face a challenge from the "rear": the Sacramento Kings (21-40) and Denver Nuggets (22-41) are "gaining" on Orlando, with each club standing 2.5 games "back" of the Magic in the lottery order. The Kings have lost three straight and Denver's dropped two in a row, so the chances of Orlando's "slipping" remain very real.

But there's good news for Magic fans who value ping-pong balls over victories: their team plays five of its next six games away from the friendly confines of Amway Center. Further, the team remains winless on the season against three of those six opponents.

Orlando opens a three-game roadtrip Tuesday against the Indiana Pacers, against which club it's 0-2 in the 2014/15 campaign. It takes on the Milwaukee Bucks just one night later.