The former Orlando point guard, recently ousted from Denver, reportedly wants to take over the Magic.

Brian Shaw dug his own grave with the Nuggets 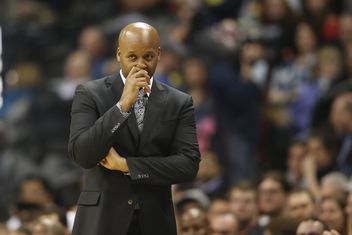 SB Nation NBA editor Mike Prada argues that Shaw was his own undoing in his ill-fated turn as Denver's coach.

Shaw spent three seasons of his 14-year playing career in Magic pinstripes, and went on to serve as an assistant coach with the Los Angeles Lakers and Indiana Pacers. After many years of trying, Shaw finally landed his first head-coaching gig with the Denver Nuggets in June 2013, but Denver cut ties with him on March 3rd after he compiled a 56-85 record over one-plus seasons.

At present, James Borrego is serving as Orlando's interim head coach; it parted ways with Jacque Vaughn--like Shaw, a former Magic point guard in his first head-coaching role--on February 5th. Borrego will finish the season at the Magic's helm, but it's unclear whether he's in the team's long-term plans. Our own Matt Graber has argued that Borrego could prove to be a viable full-time coach.

Having interest in a job is one thing, but generating mutual interest is quite another. While it stands to reason the Magic will cast a wide net, proverbially speaking, in its coaching search, one gets the sense that they might prefer a coach with more experience than Shaw, having seen first-hand with Vaughn the potential pitfalls of hiring a younger, less-experienced coach. Shaw's less-than-stellar reviews in his Denver turn will also come into play.

All told, it seems a near-certainty that the Magic will find more qualified coaching candidates than Shaw.