Borrego's time studying under coach Gregg Popovich in San Antonio is serving him well with the Magic.

Share All sharing options for: James Borrego's past paying off as he learns the ropes as Magic coach

When the Orlando Magic fired head coach Jacque Vaughn, lead assistant James Borrego was thrown into the fire, taking over a struggling team for his first head-coaching job in the NBA. Borrego, who previously worked with the San Antonio Spurs and New Orleans Hornets as a video analyst and assistant coach, had 30 games to try to turn around the Magic's season. The task, which at the time seemed daunting, is slowly coming along, and Borrego is adjusting well to the increased responsibilities that a head coach faces.

Prior to the team's game with the Miami Heat on Wednesday, Borrego talked about the toughest part of taking over the job this late in the season.

"Really identifying what we could accomplish in a short period of time," said the 37-year-old. "When a change is made like that, in-season, you can’t change an entire team overnight, or in two days. So, our challenge has been to identify what we want to focus on right now in our last 30 games, and really on a day-to-day basis."

"Our challenge has been to identify what we want to focus on right now in our last 30 games, and really on a day-to-day basis." James Borrego

Borrego went on to talk about how the team has been focusing on defense, something they've wanted to do all season. "We’ve really looked at the defensive end, trying to really hammer that every single day, make that our identity, hang our hat there every single night, and it’s been a daily process for us."

It was clear from the beginning of training camp that the Magic wanted to pride themselves on their defense. However, under Vaughn, the team struggled mightily, posting the league's fifth-worst defensive rating: the Magic gave up 106.1 points per 100 possessions. In each of Vaughn's final 14 games--12 of which the team lost--Orlando gave up over 100 points, and put together some of their most sluggish performances of the year.

Fast-forward three weeks and the Magic have found their defensive groove. In the seven games Borrego has coached, the Magic have posted the fourth-best defensive rating in the league. Moreover, the team has done the best job defending the paint and fast breaks, giving up the fewest points per game in both categories over that stretch. They also sport the second-lowest opponent field goal percentage in that stretch.

Outside of the changes he's made that's impacted the team's performance, Borrego has had to make a handful of adjustments of his own. When asked what the biggest adjustment he's had to make, Borrego said "everything."

"From practice, you’re the voice, you’re the face. You have to bring it every single day in practice. In-game is very different; it’s a completely different game for me. The number of decisions I have to make in game, after a game, after practice, from travel, every single decision is new for me. But my focus is on the team, trying to help them in practice, seeing where we can get better. And within the game, I’m just learning every single game. There’s a number of decisions you have to make: play calls, adjustments, matchups, rotations, when to take a timeout, how to interact with an official. All those things are new, and learning [them] on the fly."

One of his biggest adjustments is distributing playing time, especially after he's built different types of relationships with players while an assistant coach. "It's a challenge, but I try to be honest with our guys," said Borrego. "They all know they need to be ready every single night and their number will be called at some point so stay ready. When your number's not called, we expect you to be a great teammate. Help and support your group, but it’s also my job to communicate what I see, where they stand, with me and the group, what my expectations are for the night. I think I’m trying to help them see what the night will look like, what the next two days will look like, so they stay ready mentally."

Can James Borrego nail his audition? 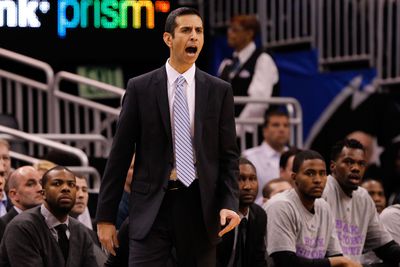 Matt Graber wonders if Borrego could be Orlando's long-term answer as head coach.

Even though it's his first time running the show, the rookie head coach feels as though he has an advantage thanks to his experience as the Spurs' video coordinator. "I think it's a great advantage. It's a great way to learn," he said.

Borrego reminisced some on his past with the Spurs and how he'd be working at six in the morning and have coach Gregg Popovich knock on the door to watch film for two hours before the rest of the coaching staff arrived. The Magic's head man talked about learning from "Pop," citing what he looked for and valued as some of the biggest learning points.

"You’re in that cave for hours, breaking down film, talking to coaches, looking at tendencies, personnel. You’re watching some of the greatest coaches, seeing what kind of sets that do. How they use offense, how they use defense. So for me, I watched so much basketball my first two or three years, so it gave me a really great base to see what I liked as a coach, what worked, and really build a philosophy or a base. As coaches, we’re always evolving, always changing things. The game changes, the league changes, players change, so you have to adapt, but those first couple of years in San Antonio were valuable to me."

Seven games into his tenure as Magic coach, Borrego is already beginning to leave his imprint on the franchise. The team had shown signs of life, and appears to be turning around and growing, like they expected to from the beginning of the season. He's still learning the ropes as a coach and becoming more comfortable, but with continued growth from both himself and the organization, Borrego could make a great case to keep the job beyond the conclusion of this season.