After three years of losing games and gathering assets, the Magic believe they're poised to compete again.

The Magic nabbed the 19-year-old wing Mario Hezonja fifth overall in the 2015 NBA Draft, but the team's most significant addition is Scott Skiles, its new coach. His 12 years of head-coaching experience and famously intense demeanor serve as departures from those of Jacque Vaughn, the reserved, first-time coach whom general manager Rob Hennigan tabbed to lead his rebuild in 2012. Individually, Magic players like Nikola Vucevic, Tobias Harris, and Victor Oladipo made strides under Vaughn, but the one-time Orlando point guard couldn't get the team to cohere or to play to its potential. Those disappointments led to his dismissal in February.

Enter Skiles, whose history of taking over struggling teams suggests the Magic ought to become significantly more competitive in short order.

Apart from bringing Hezonja and Skiles into the mix, Hennigan also secured Harris' long-term future with the franchise by inking him to a contract extension. Orlando also elected to let reserve center Kyle O'Quinn leave as a free agent via a sign-and-trade deal and added the older Jason Smith as his replacement. C.J. Watson, another free-agent signee, is already the Magic's best backup point guard since Dad Johnson in 2009.

Hennigan donated Maurice Harkless to the Portland Trail Blazers and received Shabazz Napier in a similar transaction with the Miami Heat. He also invited Keith Appling, Nnanna Egwu, Jordan Sibert, and Greg Stiemsma to camp. Former Iowa standout Melvin Ejim has joined the club on a non-guaranteed deal and could compete with second-year wing Devyn Marble for one of the final roster spots.

All told, the Magic are on a new path, one which team brass expects could lead to postseason contention as soon as this April. More on that topic below.

Youth, athleticism, and potential are Orlando's mainstays. Vaughn couldn't harness those facets of his roster, but Skiles might be able to. Already he envisions an aggressive squad which uses its hard-nosed defense to fuel transition opportunities. 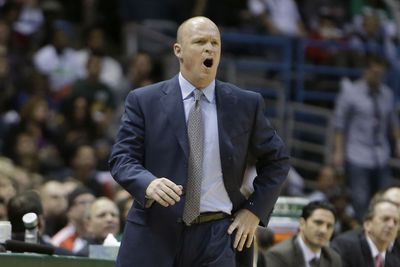 The no-nonsense coach hopes for Orlando's defense to become its trademark.

"We're gonna be really scrappy, we're gonna guard 'em up and down the floor, and when we get the ball we're gonna push it right back at 'em and try to put 'em on their heels," said Skiles at the team's annual media day.

After a surprisingly competent 2013/14 season on the defensive end, Orlando regressed in 2014/15, ranking 24th in points allowed per possession and 28th in opponent field-goal percentage. Though Oladipo and fellow backcourt-mate Elfrid Payton are solid on-ball defenders, they and the rest of the Magic couldn't consistently curtail opponent drives to the rim, and Vucevic--for all his size and length--remains a poor shot-blocker.

Skiles' defensive acumen and attention to detail could reverse Orlando's defensive fortunes. On paper and in theory, Orlando's roster--with the speedy Payton and Oladipo, the versatile Harris and Aaron Gordon--ought to be better defensively than it was a season ago. And similarly the team is built to run, a strategy Vaughn eschewed, for the most part, in favor of running straight post-ups for Vucevic and pick-and-rolls for Oladipo and Payton.

If Skiles has his way, Orlando ought to be a terror in the open floor. But what of the team's half-court offense? Even the league's speediest clubs rarely manage to end one-sixth of their possessions with a fast-break look. Without a go-to scorer or many floor-spacers, the Magic may struggle to produce efficient shot attempts against set defenses.

Payton and Oladipo can get into the paint with relative ease, but it's incumbent on their teammates to knock down the looks they create. It's also incumbent on them to improve as scoring threats off the bounce so as to warrant defensive attention in the first place; for example, no defender is gonna leave Channing Frye open on the wing because he's concerned Payton might pull up for a 15-footer, not until Payton proves himself as a shooter.

If Frye improves his individual and team defense enough to warrant more playing time, he ought to help keep the floor balanced. Hezonja can contribute here as well, provided he distinguishes himself enough to earn playing time. The rookie figures to trail Oladipo, Evan Fournier, Harris, and Gordon in the Magic's crowded wing rotation.

Who better to answer this question than the men tasked with running the Magic?

"Our goal is to make the playoffs. We're not gonna hide from that." Rob Hennigan

"Our goal is to make the playoffs," said Hennigan during the team's annual media day. "We're not gonna hide from that. That's a healthy goal, in our view. Our expectation is to compete for a playoff spot throughout the season."

Skiles is aiming even higher.

Oladipo builds upon his strong finish to the 2014/15 season by becoming a more consistent and efficient scorer.

Gordon develops into a solid individual and team defender, fulfilling some of the potential he showed as a rookie.

Neither Skiles nor Hennigan gets his wish: Orlando finishes with a losing record and just outside the playoff picture at 35-47. However, it'll at least have played more meaningful games deeper into the season than it has in recent history.