Orlando Magic to retain Dewayne Dedmon, according to report

Orlando has no plans to release the second-year big man prior to Wednesday's deadline.

Share All sharing options for: Orlando Magic to retain Dewayne Dedmon, according to report

The NBA's deadline to waive players before all contracts become fully guaranteed will pass without the Orlando Magic's releasing Dewayne Dedmon, reports Josh Robbins of the Orlando Sentinel. Dedmon's salary--worth the league minimum, according to ShamSports' database--will thus remain on the Magic's books for the balance of the 2014/15 season. 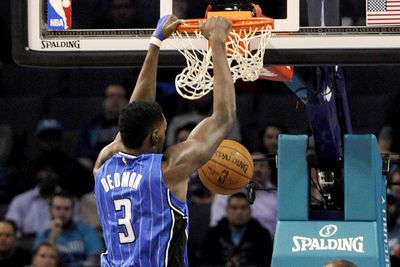 Zach Oliver talks to Dedmon about his role on the Magic.

If Orlando intended to waive Dedmon, it would need to do so by 5:00 PM Wednesday so he could clear waivers before January 10th, the date at which all players' contracts become fully guaranteed.

The Magic's roster remains full at 15 players, meaning that if they want to sign a new player, or perhaps call up one of their NBA D-Leaguers--a possibility to which our Zach Oliver alluded Wednesday morning--they would need to clear a roster spot by other means.

In his second pro season, his first full one with Orlando, Dedmon has averaged 3.3 points and 4.2 rebounds in 11.4 minutes per game, shooting 51.4 percent from the floor. His energy and defensive mentality have helped him earn the trust of coach Jacque Vaughn, and he's carved out a regular role in Vaughn's rotation.

Dedmon first joined the Magic on a 10-day deal in February 2014. After his second 10-day expired, Orlando inked USC product for the rest of the season.