Jacque Vaughn to remain Orlando Magic coach through Saturday, according to report

Orlando's coach will keep his job at least through Saturday's game against the Mavericks.

Share All sharing options for: Jacque Vaughn to remain Orlando Magic coach through Saturday, according to report

The Orlando Magic will reportedly retain head coach Jacque Vaughn through Saturday's game against the Dallas Mavericks, but his future remains in doubt beyond that contest. That news comes via Adrian Wojnarowski of Yahoo! Sports, in an update he posted Friday morning. 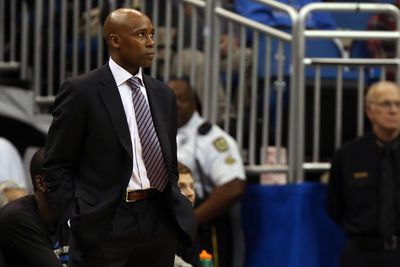 Our Zach Oliver says the time has come for Orlando to move on from Jacque Vaughn.

"[Vaughn's] job security beyond the start of the two-game trip to Oklahoma City and San Antonio beginning on Monday is uncertain," says Wojnarowski. The Yahoo! scribe also notes that the Magic may have cut ties with Vaughn sooner, but the absence of an experienced assistant coach who could serve as his replacement in an interim role delayed that decision.

The Magic have lost 13 of their last 15 games and have plummeted to 13th place in the Eastern Conference. Multiple news outlets reported early Friday morning that Orlando was strongly considering relieving Vaughn from his duties after two-plus seasons guiding the Magic's rebuilding project.

Vaughn's Magic contract, like that of general manager Rob Hennigan, runs through the 2015/16 season.