Orlando snapped its losing streak Monday, but only after dropping in the power rankings.

The Orlando Magic picked up a stunning win Monday against the Chicago Bulls, snapping a six-game losing streak. That long stretch of futility, which included defeats against the below-.500 Los Angeles Lakers and Denver Nuggets, prompted SB Nation NBA contributor Drew Garrison to drop Orlando to 27th in his NBA power rankings, the latest edition of which feature he published Monday afternoon. 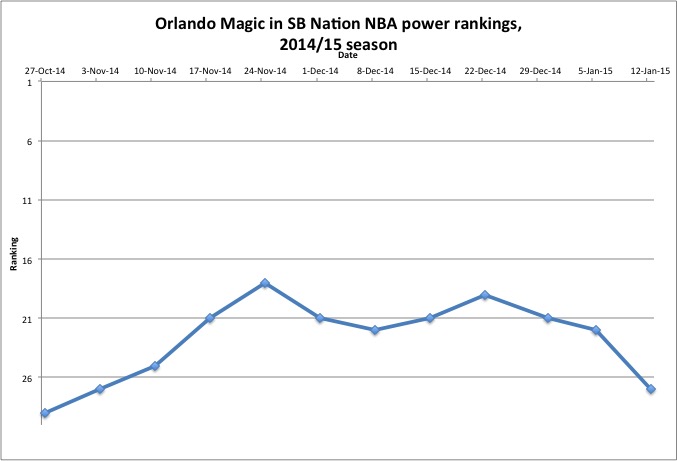 The Magic haven't moved up in SB Nation's NBA power rankings in nearly a month.

"The Magic are on a six-game losing streak and things aren't getting any easier going forward," says Garrison. "Chicago, Houston, Memphis, Oklahoma City and Detroit are next in line." He calls the Magic's game against the New York Knicks on January 23rd their "next winnable game," but Orlando proved him wrong Monday.

The ranking is Orlando's worst in Garrison's weekly list since November 3rd, when he rated it 27th overall following an 0-3 start, one in which it lost by an average of 12.3 points per game.