Orlando Pinstriped Post Mailbag no. 30: Who will lead the Magic in scoring?

Without an offensive star, plenty of Orlando players could contend for the honor.

Share All sharing options for: Orlando Pinstriped Post Mailbag no. 30: Who will lead the Magic in scoring?

The latest Orlando Pinstriped Post Mailbag question concerns the Orlando Magic's offense. But before we dive into that subject, a quick reminder that we're always accepting Mailbag question submissions. Send yours to OPPMailbag@gmail.com or to our Facebook page.

Let's move on to that question.

Hi guys, there's not much going on, so I have this question for you: Who do you think will be Orlando's leading scorer next season?

This question presents a lot of challenges to answer. Of the six players who posted double-figure scoring averages for the Magic in the 2013/14 campaign, only three remains with the team. Arron Afflalo, who paced the team in each of the last two seasons, has moved on to the Denver Nuggets, so it's a wide-open race. Several players figure to have a shot of leading the Magic in this category. Here are some candidates.

In his third season, Vučević ranked third among Orlando players in scoring a season ago, posting 14.2 points per game in 31.8 minutes. He increased his average despite playing fewer minutes per game, and he essentially maintained his scoring efficiency. Given those facts, and his age--the Montenegrin center doesn't turn 24 until October--it's clear Vučević is still on an upward trajectory.

The Magic have indicated they plan to feature Vučević more offensively, particularly on the low block, as they continue their rebuilding project. He'll get plenty of touches, in straight post-ups as well as in pick-and-roll and pick-and-pop actions. His facility on the offensive glass will also goose his numbers a bit.

Working against Vučević is the very nature of his position: in today's wing-dominant NBA, bigs rarely get enough touches to lead their teams. And the Magic may have a more wing-heavy offense in the year ahead as they attempt to up the tempo and the frequency of their fast-break chances.

But Vučević is talented, growing, and a big part of Orlando's future. Even if he doesn't lead it in scoring, he could come darn close. 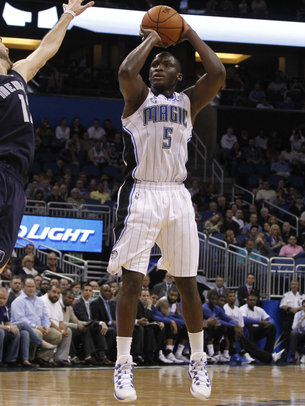 In his rookie season, Oladipo posted a respectable 13.8 scoring average, ranking fourth on the team, four-tenths of a point behind Vučević. While his efficiency left plenty to be desired--the Indiana product posted a True Shooting mark of 51.4 percent--he nonetheless had plenty of opportunities to put the ball in the bucket, playing primarily at lead guard.

The Magic have invested a lot of player-development capital in Oladipo, the second overall pick in the 2013 NBA Draft, and have high regard for his potential. He'll get a ton of touches in his second pro season, but it remains to be seen what sort of role he'll play: he backed up Jameer Nelson at point as a rookie, and coach Jacque Vaughn has more options in the season ahead: he can continue to play Oladipo there as a starter, or he could shift the Maryland native to the two, the position he played collegiately, allowing the rookie Elfrid Payton to start.

The latter move might cut some of Oladipo's scoring chances, but could boost his efficiency, given that he likely wouldn't take nearly as many long jumpers off the dribble.

Orlando's playing at a faster pace could work to Oladipo's advantage, giving him transition opportunities with the ball in his hands or filling the wings.

Harris quietly put together a strong third pro season, his second with Orlando, in 2013/14. An ankle injury he sustained in the preseason limited him to 61 total games, and he didn't earn a full-time starting gig, but he nonetheless averaged 14.6 points in just 30.3 minutes per game.

Harris does plenty of things well--rebounding is another strength of his--but there's no question his foremost skill is scoring, particularly when he plays in attack mode and gets into the paint, where his size and ability to finish through contact serve him well.

Harris' three-point shot eluded him in 2013/14, as he connected on just 25.4 percent of his triple-tries, but he took those shots less frequently as the season wore on, to great effect: by maximizing his strengths, he boosted his efficiency, posting a True Shooting mark of 58.4 percent following the All-Star Break as three-pointers comprised 12.7 percent of his total shot attempts.

Harris has the raw skills to lead Orlando in scoring. What's less certain is his number of opportunities: he figures to open the season backing up free-agent signee Channing Frye, his cousin, at power forward, and as such he may not log starters' minutes, even allowing for his playing a handful of minutes at small forward. Thus, of any of the players listed, Harris probably stands the lowest chance of leading the Magic offensively.

Who do you think will lead Orlando in scoring? Vote in the poll attached to this post and comment along below.