NBA free agency 2014: How can the Magic use Channing Frye?

Tyler Lashbrook studies the film to answer that question.

Share All sharing options for: NBA free agency 2014: How can the Magic use Channing Frye?

The Orlando Magic spent big money--$32 million over the course of four years--this summer to sign Channing Frye. Standing 6'11, Frye is a three-point marksman who takes advantage of big men unequipped to defend the arc. NBA players, over the course of the regular season, only really have a day, maybe two, to prepare for a team and Frye is one of the most difficult players to prepare for.

That's because he doesn't camp in the corners like most floor-spacing bigs. Instead, Frye prefers to work along the top of the key, down to each wing. It's a weird niche. Frye loves trailing fastbreaks right to the top of the key to net quick three-pointers. In the half-court, he'll squirm his way around the top of the key, spot up and wait for an incoming kick out pass.

He's a tricky pick setter, graduating from the Tim Duncan School of Flipping Picks. He'll run up flat, choose a side then flip at the last second. Sometimes he'll pretend that he's setting a pick, only to slip away to the three-point line.

And he'll really only slip to the three-point line. He rarely ever rolls to the rim and if he does, it's only a split second until he jettisons back out to the arc.

The Phoenix Suns took advantage of Frye's unusual skill set during his four-year tenure. They used him as a screener and as a pick-and-pop guy. They even ran him off screens and set up misdirections designed to get him open looks from deep.

In order to understand how the Magic may utilize Frye, I watched every single three-pointer Frye made last year and kept an eye on different actions the Suns used to get him the ball. This is what I found:

This is the most basic action that Phoenix used to get Frye open looks. The idea is simple: Get Goran Dragic a head of steam going to his left hand--his strong hand--and let him create. 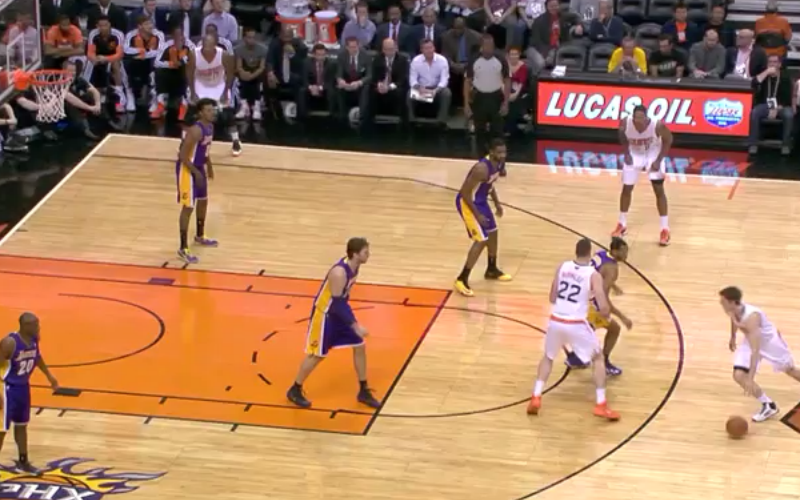 Miles Plumlee and Frye start off at the elbows, basically in a "horns" set. Then, as Dragic approaches, Plumlee slides up to set a middle pick. Dragic flies off that screen as Frye slips to the wing. The crafty point guard crashes into the paint and flips the ball to a wide open Frye for the three-ball. 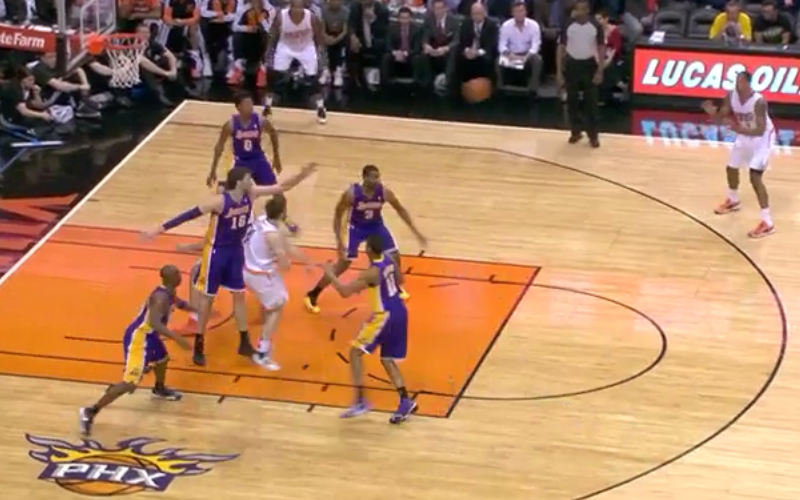 The action is simple enough and lifting Frye to the wing gives Dragic room to operate in the paint. Some teams run this same initial action, but keep their four-man around the opposite short corner for dump offs. Here, the Suns utilize Frye's floor spacing and Dragic flings the ball over to him as soon as the defense commits.

In Orlando's system, Frye will likely be flipped to the other wing, in order to allow Elfrid Payton and Victor Oladipo, whomever is handling the ball, to get going to their right hand.

There's a lot of cool, creative things you can do with Frye in horns sets. When Plumlee and Frye were both in the game, Phoenix liked to send Plumlee diving to the rim. With Markieff Morris, however, the Suns used this nifty little "fake" action to get Frye open.

Morris slides up as Plumlee did in the prior set, but instead of setting a big pick, he only brushes Jameer Nelson. Andrew Nicholson drops back, per Orlando's normal scheme, leaving Nikola Vucevic alone to handle Morris and Frye. Morris acts quickly, gets away with a moving bull-screen, and frees up Frye for the trey ball at the top of the key.

In this set, Frye acts as the center and puts Vucevic in a particularly difficult spot. Again, this action could work in Orlando, replacing Morris with the similar Tobias Harris.

The Suns also actively used Frye in baseline out and side-out sets. Sometimes he was used as a floor-spacing decoy. Other times, like the example below, he's the main target.

Here, Dragic comes around a zipper screen, catches the ball and zooms over to the awaiting Frye. Derrick Favors, responsible for the impossible task of protecting the rim and defending Frye, slides over to cut off Dragic. The Suns point man realizes this and hits the fading Frye right in his sweet spot.

Again, these are the types of mismatches Frye presents. How in the world is Favors supposed to defend the pick and recover to the open Frye? He actually does a decent job of recognizing the pop action, but doesn't have the foot speed to fully contest Frye's quick release.

In this play, Ish Smith feeds Morris in the pinch post then runs down to set a screen for Marcus Morris. Frye sits off on the wing and spreads the floor and Archie Goodwin makes his way towards the corner. 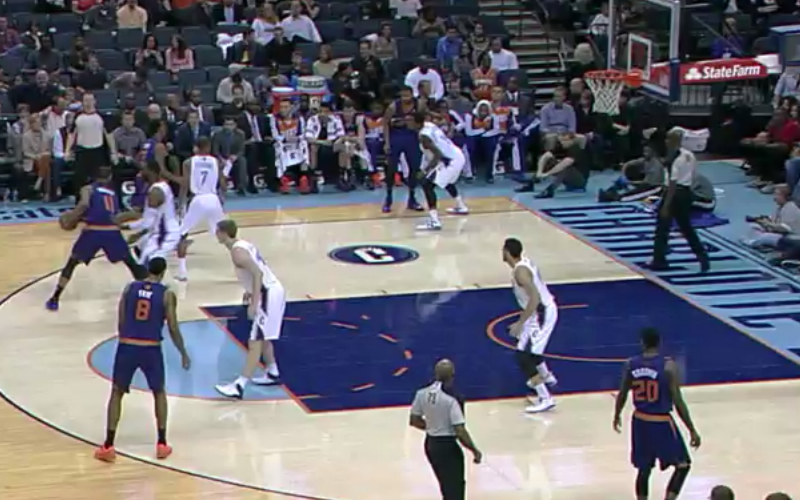 The Brother Morris deliberately curls here in order to force Frye's man, Cody Zeller, to make a decision. Zeller, realizing his teammate is stuck fighting around a screen, tries to play the middle of the play, but inches a few steps too far away from Frye. 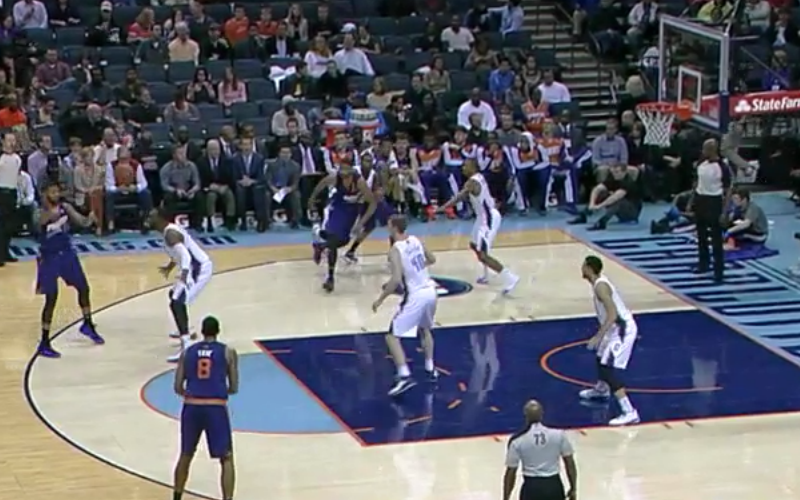 Markieff, realizing Zeller has slipped too far in the paint, zips the ball over to the open Frye for the three-ball.

This simple initial action is one of my favorites in basketball, especially when used with the right personnel. 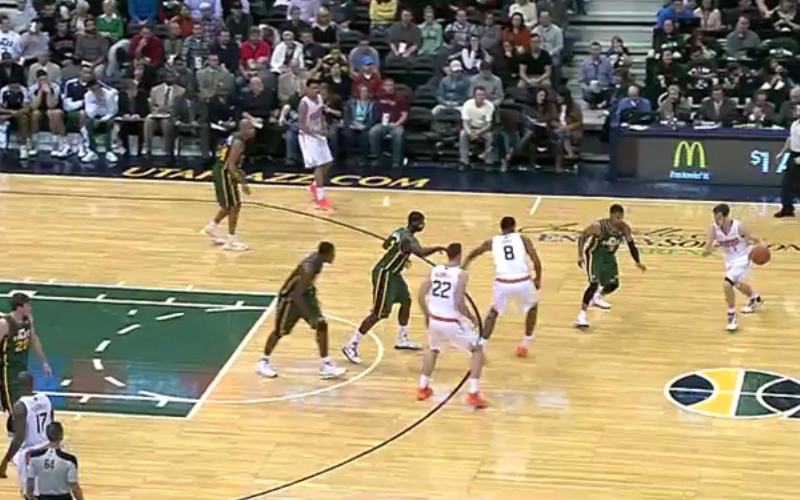 Frye and Plumlee set their hips at a slight angle, giving Dragic two picks to work with along the top of the key. 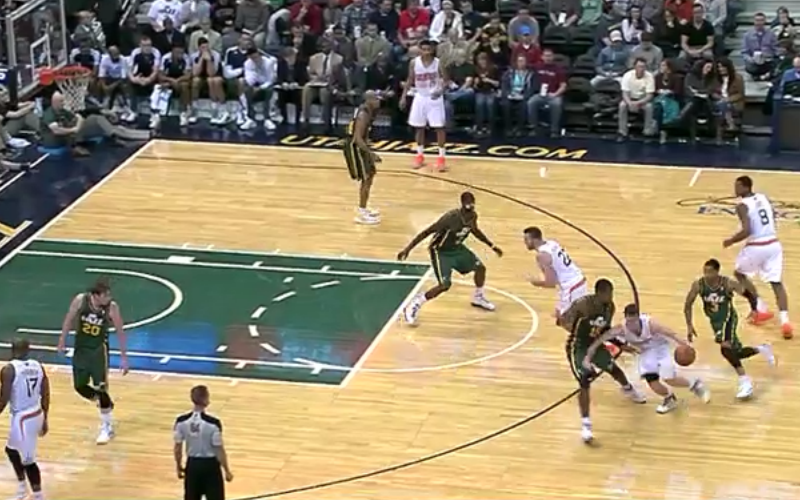 Plumlee, an effective diver off the pick, crashes hard into the lane. His man, however, is stuck playing out to Dragic on the three-point line in order to contain penetration. Frye's man, Marvin Williams doesn't really have a choice but to stick in the middle with Plumlee; he can't afford to give up a wide-open dunk. Frye slips to the three-point line accordingly and Dragic finds him for the three.

There are other actions that teams use with the double-drag. Sometimes, the man in Frye's position slips off to screen the corner, setting up another pick-and-roll on the side. But in this case, Frye slides to the arc and bangs home the three. It's easy to imagine Orlando running a similar initial action, replacing Plumlee with Vucevic, Kyle O'Quinn or the more nimble Aaron Gordon.

Here's another, slightly trickier, version of that same set:

Here, the original double-drag is just a decoy for the second. In the second action, DeAndre Jordan and Blake Griffin get caught napping. Just as they do, Plumlee runs into Griffin, Frye's defender, and pins him back to the free-throw line. Another open jumper for Frye.

SIDE PICK AND POP

Frye forces teams to completely reconsider their game plan. Most NBA teams want to "blue" side pick-and-rolls. It's also called "ice," the terminology just depends on the team. The idea is that teams want to push the defender to the sideline to the contain, and give up inefficient, long-twos to the big man.

Frye kills that philosophy by simply shooting threes, rather than the long-two. 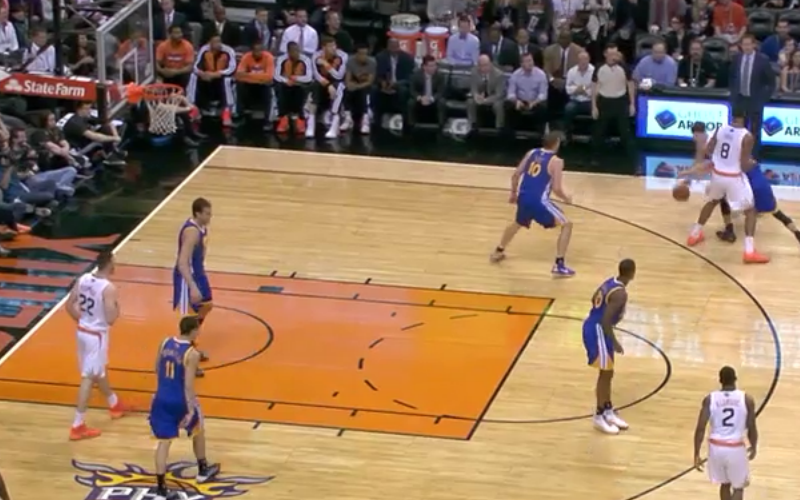 The key to making a side pick-and-roll work when a team ices or blues it, is for the point guard--Dragic here--to bring the ball as close to the baseline as he can to render Frye's man useless. 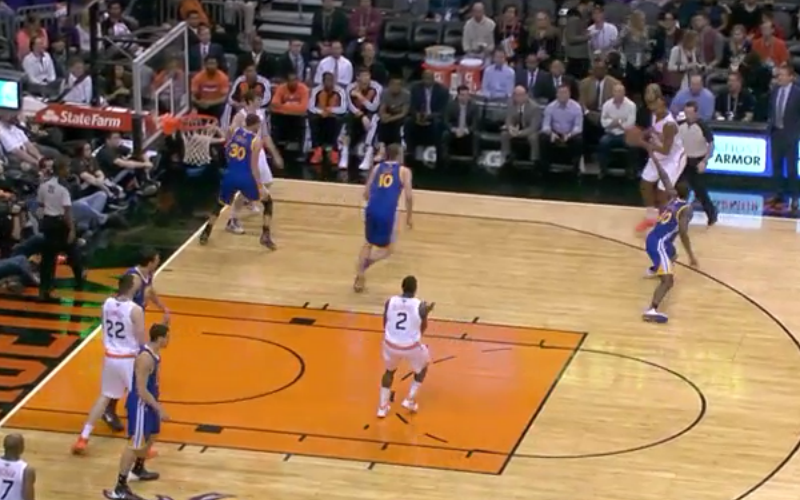 Harrison Barnes hesitates ever so slightly in rotating over and Frye knocks in the long range shot. I'll show you later how this forced Golden State to reconsider how they were defending side pick-and-rolls in another matchup.

The "pistol"--or "21" if you're part of the Mike D'Antoni Camp--is a more modern initial action that almost every team across the NBA uses today. It involves the original ball handler usually handing off to another ball handler on the wing, then the other action runs from there.

A lot is going on here, but focus on Frye. He sets up right at the elbow as the initial Dragic-Bledsoe exchange happens. Then he sets up a back screen for Bledsoe. P.J. Tucker looks for Bledsoe backdoor, but Frye's man, Tiago Splitter, moves ever so slightly back to help. With Frye, moving ever-so-slightly in the wrong direction means you're already dead.

Below is a simpler action out of pistol.

As the Bledsoe-Dragic exchange begins, Frye plants himself right at the top of the key. Dragic moves immediately to his left hand and Frye pops out to the wing. Dragic kicks it back for the open jumper. That's a nice, simple, easy-to-implement play.

You could exchange Payton and Oladipo with Bledsoe and Dragic in either of these examples and run the exact same action. I imagine we'll see a lot of these initial pistol actions this year with the Magic.

This is the perfect example of how you can really get creative with a guy like Frye. Full disclosure: Frye nets this jumper, but the .gif capped out on the end so I cut it so you could see the action.

Dragic cuts right through the paint, nudges Noah to free up Plumlee on a cross screen then heads to the top of the key where a waiting Frye sets a pin-down. Dragic deliberately curls it and rams right into Taj Gibson to take him out of the play. Frye steps back and Dragic's defender, Jimmy Butler, is too busy chasing Dragic to see what is happening behind him. Frye bangs home the three.

Of the 160 three-pointers Frye made last year, this was my favorite. There's so many different actions, misdirections and trick cuts that you can use to free up Frye. This was a beautiful and creative example from the Suns.

There were other ways the Suns used Dragic and Bledsoe with Frye. One time, Bledsoe brought the ball up the court, Dragic zipped up the middle of the floor, caught the ball and went right into a pick-and-pop. Other times, Frye would set a simple pin-down screen off the ball for either guard. The guard would deliberately curl to pull Frye's man into the paint and all of the sudden Frye would be open behind the arc.

He helps in transition, too. Phoenix liked to send two shooters to the corners; Plumlee would haul his butt down the middle of the floor and Frye would slowly trail the play. Then he'd find an open spot on the wing and pop an open transition three.

Frye has this weird gravitational pull on all the defenders, especially after he's hit a three or two. Remember when I showed you how Golden State iced Frye and gave up an open three? In the next meeting against the Suns, they made sure to stick with him out to the perimeter. This is what Dragic's driving lane looked like: 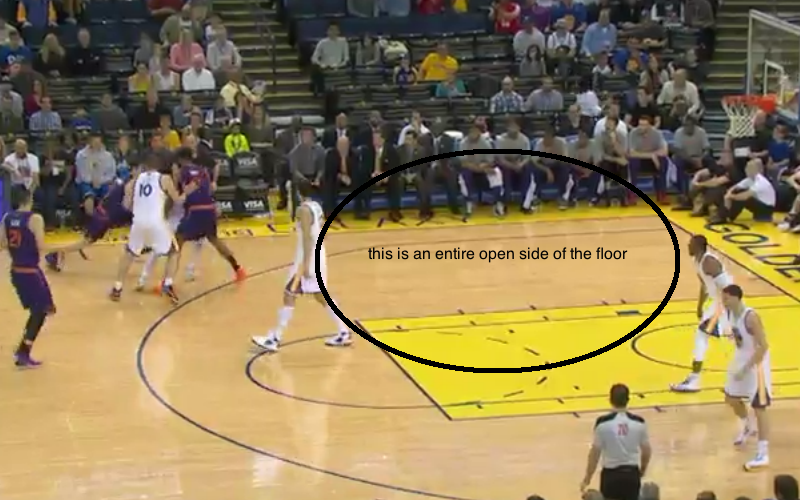 That's a lot of room to operate. Put Payton and Oladipo in Dragic's place and they are at least getting to the rim. How they handle themselves when they get there is another topic of discussion, but at least there are lanes to roam.

There's plenty of different ways for Orlando to use its newly acquired veteran. It'll be interesting to see what types of pet plays and actions they can design to mesh Frye with Oladipo, Payton, Fournier and anyone else with ball-handling responsibilities. The Magic paid top dollar to acquire Frye and his unique skill-set, but they'll have a number of different ways to get a return on that investment.