In these capsules, Tyler Lashbrook scouts how the top four players on the Orlando Pinstriped Post Community Big Board might fit with the Magic.

Tyler Lashbrook opens his series of scouting reports on 2014 NBA Draft prospects with this inside look at the top four players on the Orlando Pinstriped Post Community Big Board. Tyler will make general assessments about the players, and then specifically attend to how they'd fit with the Orlando Magic. - ED

Let's do this thing. 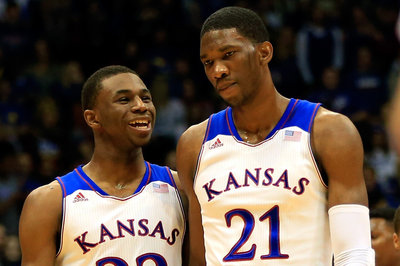 Embiid missed the last month of his only college season with a stress fracture in his lower back. But I have a feeling that he'll go No. 1, provided a doctor reassures that he won't have a chronic injury history.

Here's snippet from my in-depth scouting report on him for SBNation.com:

Embiid is an enormous and athletic big man who is much further along in his development than anyone expected. Big men this skilled can shape the direction of an NBA franchise. He has issues with fouling and turning the ball over, but both of those problems should get better with the proper coaching.

However, that back injury, a lower stress fracture, is a major cause for concern -- 7-footers and back problems don't mix. Most pre-draft reports suggest that Embiid is 100 percent healthy, but that isn't the real issue. It doesn't matter if he's healthy in the short-term, the question is whether he can stay healthy enough to sustain an NBA career.

Potential fit in Orlando: Provided he's healthy, Embiid will not be available when Orlando selects, but he would be excellent value at No. 4, especially if the Magic wanted to make another move on Draft Night.

I'm not sold that he would fit alongside Nikola Vucevic, but picking Embiid wouldn't be for the purposes of playing the two together. It would give the Magic options in 2015 when Vucevic becomes a restricted free agent. If his value rises to a price the Magic are unwilling to pay, then they can let Vucevic walk and allow Embiid to fill the starting spot, still on a rookie contract. Boom.

I'm not sure I've ever seen a college basketball player more scrutinized than Wiggins. Whatever. He's still a fantastic NBA prospect. Here's some stuff I wrote about him in the prospect series:

Wiggins is a human pogo stick with go-go-gadget arms. He doesn't jump, he levitates off the ground -- It's almost as if he pauses in the air before returning back to earth. When he finally lands, he has the ability to pop right back up. Wiggins' second jump is incredibly quick and makes him deadly on the offensive glass.

Wiggins uses his athleticism best on defense. He's extremely quick laterally and can recover back to his man faster than anyone in the draft. He's fast enough to stay in front of smaller guards and tall enough to guard bigger wings. Wiggins was essentially unstoppable on the break at the college level, scoring 1.3 points per possession in transition -- fourth best in DraftExpress' Top 100...

... It's when the game slows down that Wiggins struggles most. He's not very good at maneuvering through traffic, often dribbling too high in the air while being too reliant on his right hand. This hurts his ability to create offense for himself and others in half-court situations. He also frequently settles for long pull-up jumpers in the pick-and-roll because he isn't capable of splitting defenses or making advanced dribble moves towards the basket.

Victor Oladipo would have to make more strides as a playmaker in order to play point guard with Wiggins at the two. Wiggins isn't a great ballhandler yet and I'm not convinced he'll ever be a great passer. But Wiggins would also give Orlando two of the best backcourt athletes in the NBA. The pairing would immediately be a terror on defense and in transition.

I think it could work in the half court if Arron Afflalo were sandwiched between the two, giving Orlando an extra playmaker on offense and taking pressure off of Wiggins to come in and be a high-volume scorer. Jameer Nelson would also work alongside the young pair. He could run the offense, giving Oladipo and Wiggins the freedom to wreak havoc on the wings. I'm not sure there's a chance, though, that the former Kansas wing falls to the fourth overall pick.

Sorry, I have to put one of my favorite plays from the college basketball season in this space:

Graceful, athletic, incredible body control. How long has it been since we've seen an athlete this size this good with the ball in his hands on the break? My buddy Sam Vecenie told me that he thinks Parker's the closest thing we've seen to LeBron James as a one-man fast break, and I tend to agree.

Here's a snippet from my scouting profile:

Players with Parker's size and skill are rare. In the NBA, he'll be able to play power forward in smaller, hybrid lineups, just like LeBron James and Kevin Durant word. But he'll also play on the wing. His main issues -- shot selection and defensive effort -- are both fixable under the right coach.

With an NBA ready body and impressive offensive game, he'll be next season's favorite for Rookie of the Year. Parker's the most skilled player in the draft and will slide into a starting lineup immediately, where he'll be a very productive NBA player for the next decade-and-a-half.

Potential fit in Orlando: I addressed the topic of whether or not Tobias Harris and Parker can co-exist earlier this year in a mailbag. Harris and Parker are very different offensive players. Harris bullies his way to the rim on straight-line drives, whereas Parker uses a variety of finesse moves and is a legitimate three-point threat. I like the idea of rolling with two combo forwards and cross-matching based on matchups.

I also like the idea of keeping fluidity within the roster. Parker isn't a tweener; he can legitimately play either forward spot, depending on the lineup. He could also serve as an extra ballhandler, taking pressure off of Oladipo. There's a lot of different ways you can use Parker, and that's a big advantage. If he slips to no. 4, the Magic won't hesitate to pick him.

I haven't written a ton about Exum because I just haven't seen him play in enough meaningful games. Luckily, Magic general manager Rob Hennigan has, and if he's impressed, then that's enough to convince me that Exum is worth one of the top picks. Here's the most basic scouting report I can give of the Australian youngster: 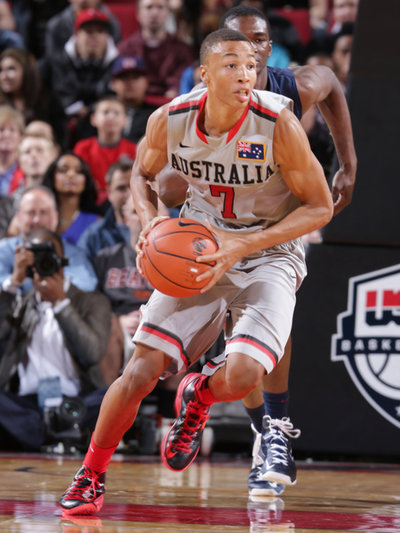 Size: He measured slightly taller and two inches longer than Michael Carter-Williams, the Philadelphia 76ers' athletic and huge Rookie-of-the-Year point guard. Even if Exum isn't a point guard, then he still has an impressive frame for shooting guard.

Athleticism: Exum didn't register an overwhelming max vertical (34.5 inches) at the Draft Combine, but he was lighting-quick in the agility drills and he dominated the shuttle drill. That matters because it tells me that he has all the physical tools to at least develop into a good defender.

Slashing: He's big with a super-fast first step which means that he should be able to get past his initial defender. This skill creates all kinds of trouble for the defense because it forces help-side defenders to respond and opens up shooters all over the floor. In theory, he should be able to create easy opportunities for his teammates, assuming he has the ability to make the pass.

Defensive potential: Size plus lateral quickness equals the opportunity to develop into a good defender. I honestly don't know how he is on that end of the floor because I haven't seen him play enough to really get a gauge. But the tools are there to become a plus on defense.

Body strength: He's wiry thin and this means that it'll be difficult for Exum to finish against NBA defenders, at least at first. I don't believe this issue will be a major one once working out is his full-time job and he begins to develop his man strength, which is a real thing, I promise!

Shooting: The latest stats I can find showed that he was a poor (61 percent) free-throw shooter, which simply has to improve. I tend to believe that free-throw shooting is the biggest indicator of a player's ability to improve as a shooter, so that 61 percent mark bodes ill. Luckily, he's had a lot of time between recording those stats and the Draft to improve.

His spot-up shooting is encouraging and I like his mechanics, as he's smooth and balanced when he sets his feet to shoot. But he really struggled shooting off the dribble--19 percent, per DraftExpress.

Point-guard skills: If Exum is the lead guard, then he should be able to run an offense by taking care of the ball and putting his teammates in the best positions to score. Can he do that? I just really don't know. I know it feels like a cop out, but I don't because I didn't watch him play enough full games to make an informed assertion. It seems like he has the physical tools to be a playmaker and from everything I've read, he doesn't seem selfish. But I really don't know.

Potential fit in Orlando: Oladipo and Exum could work in a modern, two-guard lineup, an offensive set that Orlando used a lot in the 2013/14 season. The two could work to relieve ballhandling pressure off one another. Defense is where they'd thrive. The combo would be super long, athletic, and able to handle any type of cross-matching.

The issue here is shooting. If both backcourt players are poor long-range shooters then it'll absolutely kill the team's spacing. That was already an issue in 2013/14, and if neither Exum nor Oladipo can command respect from deep, then teams will cramp the lane and invite them to launch jumpers. That alignment, in turn, cancels out any athletic advantage that the pair might have. If one player--or even better, both--can become a consistent jump shooter, then the pairing will work well. If not, it could really be a disaster.