Let's see what skills the former Nugget brings to Orlando.

Amidst all the lightning-quick armchair commentary and naysayers--the frivolous, hasty bunch that seep through the proverbial Internet gutter that is Twitter--that sprouted up moments after the Orlando Magic traded Arron Afflalo, you would have been hard-pressed to learn that Orlando actually received, you know, a basketball player. His name is Evan Fournier and it turns out that he's a pretty nice prospect, one that struggled to earn consistent minutes in Denver, but one that flashed, at times, very fundamental basketball skills.

In Denver, Fournier was more prospect than player. He had an impressive rookie season in spot minutes, putting up per-36 averages of 17 points and 3.7 assists while shooting 54 percent inside the arc and 41 percent outside of it. His sophomore season, however, was a bit of a disappointment. He averaged nearly 20 minutes a night and continued scoring the ball, but hit dips in two-point (45.3) and three-point (37.6) shooting.

But here's the thing: When Fournier was given consistent minutes, he produced and did so efficiently. In 2013/14, the Frenchman played 30-39 minutes in 12 different games. He averaged 18.6 points, 4.8 rebounds and three assists on 57.1 True Shooting and 42.1 percent from three. In that same split, Afflalo averaged 18.4 points, 3.3 rebounds and 3.4 assists on 56.7 True Shooting and 39.8 percent from range. That is in no way meant to say that Fournier is as good or better than Afflalo, but it shows his potential.

Interesting enough, the Denver Nuggets were actually better with Fournier on the floor, too. The team registered a 0.1 net-rating with him on and a -3.5 net-rating with him off, per NBA.com's media site. Fournier's a crafty and diligent ball handler, capable of serving as the second guard in any lineup. He's a streaky and inconsistent shooter but his flashes are bright enough that he's still above league average.

I was in charge with scouting the draft's top prospects for SB Nation's home page. For those profiles, I stuck to a very specific method: I would watch a guy's best and worst games to gauge his ceiling and floor, and then project him somewhere in the middle. This methodology is used throughout the league to evaluate players. Let's apply it to Fournier here.

Fournier showed a lot of variety in his offensive game here and scored in several different ways. He netted a few spot up threes, one long range shot out of the pick-and-roll, a step back jumper, and he scored in transition.

But what I really liked from Fournier here was his passing; he registered five assists in this game. Roundball Mining Company editor Kalen Deremo told me in an interview--look for it later Sunday here at OPP--that Fournier has "above-average distribution skills," which is something that DraftExpress echoed in its scouting report:

Patient and mature with his drives, he reads the secondary line of defense extremely well, frequently making intelligent passes off the dribble to cutting teammates as help-side defenders rotate towards him.

When he was a 19-year-old playing professionally in France, Fournier got "the majority of his touches in pick and roll, transition and isolation situations, all of which he's fairly effective in." Against Sacramento, he showed poise in the pick and roll. Here he works with Jan Veselý: 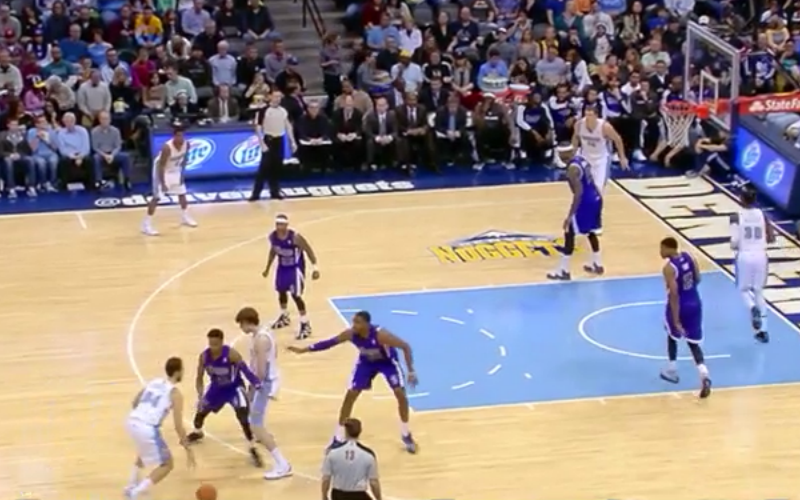 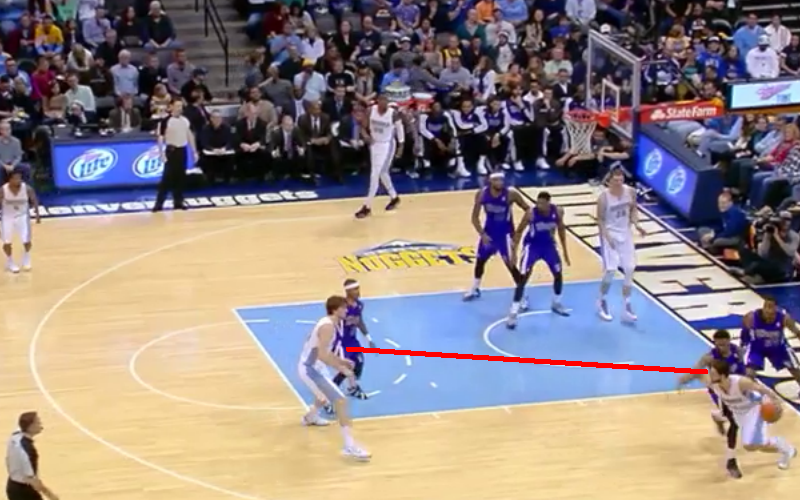 He digs down to the short corner, taking two Kings defenders with him, circles back to his left hand and looks for Vesely. But Isaiah Thomas is there, ready to intercept the pop pass. Fournier doesn't panic, though: He slices into that open space with his left hand. 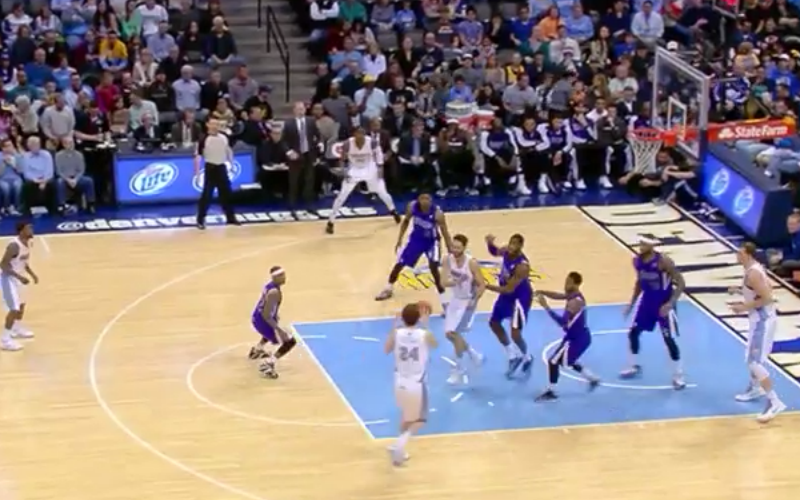 When he cuts into that space, Thomas is forced to help back on Aaron Brooks. The pick-and-roll tandem follows Fournier back to the lane and Fournier rightfully hits the open Vesely. If there's anything Orlando has on its roster, it's plenty of big guys who can knock down that elbow jumper.

For context: Ty Lawson was out for this game and it killed the Nuggets. As a team, they turned the ball over 25 times. Twenty-five. In 48 minutes. Pretty unbelievable. Not having that lead guard really hurt Fournier. He was forced to handle the rock with Randy Foye and it turned out poorly.

The Raptors are a young, long-armed, and athletic team that makes its money by forcing turnovers. They have a plethora of wing athletes and those guys--Terrence Ross, specifically--gave Fournier fits. Ross blocked his shot three times.

This game was an all around horrible one for Denver and Fournier, but I really, really liked this wheel play it drew up in the first half. 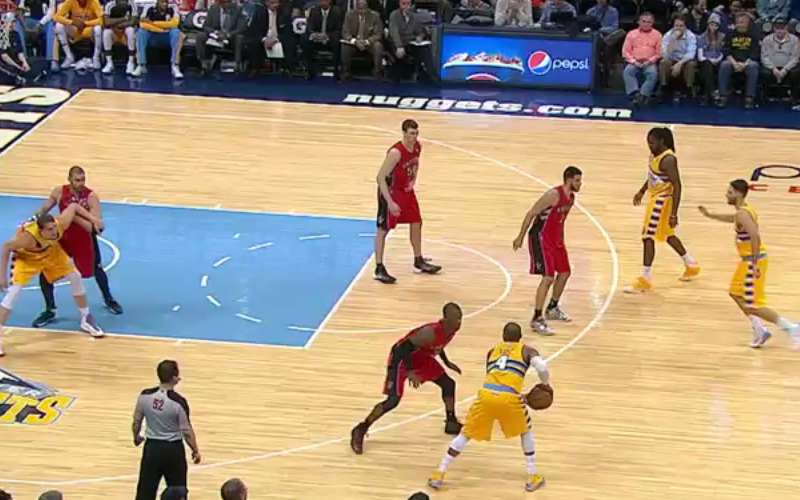 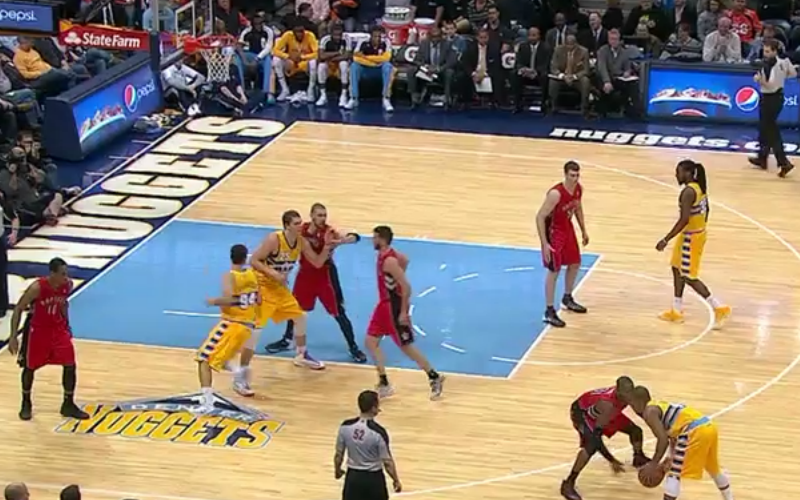 Fournier starts at the key with the ball in his hands. He passes to Foye on the left wing, sets up Greivis Vásquez to the right, and cuts left down to the block. He then wheels back around up toward the top of the key where Kenneth Faried is setting up a flat screen. 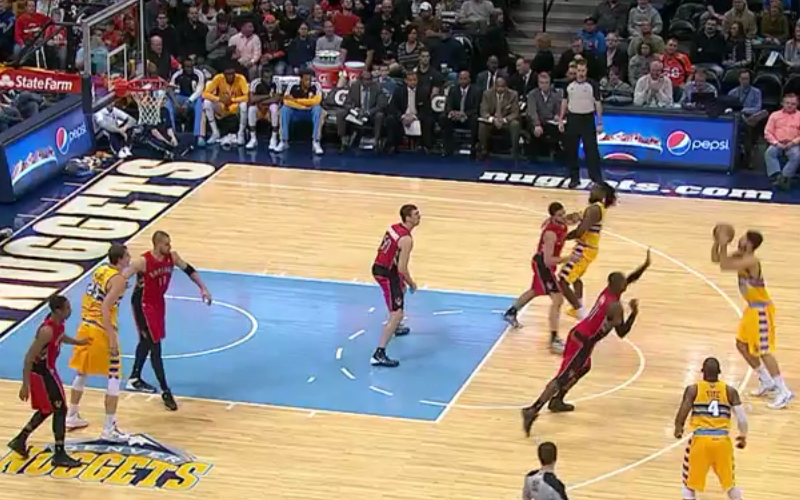 Fournier drills the shot from the top of the key. It was a simple play--one in every NBA team's aresenal--but it worked to perfection. It's also a similar set that Orlando so wonderfully used for Arron Afflalo. That's Fournier's play now.

We learned in this game that Fournier is much better when playing alongside a lead guard. Foye is a steady little guard, but he should never be the primary playmaker on the floor. Lawson's absence really hurt Fournier. For the season, Fournier was 5.3 points per 100 possessions better playing alongside Lawson, per NBA.com/stats. The Frenchman can handle the ball in pick and rolls and he can be your second-best ballhandler, but he works better when he can be a threat both on and off the ball.

In a perfect world, Fournier would fill Afflalo's shoes easily. But it's not a perfect world and that isn't going to happen. Magic fans should be encouraged, however, by the tools he has in his toolbox. He's a streaky three-point shooter, but already the best--or second best depending on your view of Doron Lamb--on the team.

He isn't a great athlete, but he's a crafty ballhandler with good passing vision. That lack of lateral quickness does, however, limit him on the defensive end, where he isn't fast enough side-to-side to stick with the quicker two-guards. But the good news is that Orlando has enough athletes on the wing now to hopefully mask some of those deficiencies.

Fournier fills a need (shooting) and he can serve as a secondary ballhandler and playmaker, but how much will he play? Victor Oladipo is undoubtedly the team's starting shooting guard. Fournier can slide to small forward for spells, but his lack of elite length and thin frame will likely make it tough for him to guard bigger threes. Still, he has the ability to carve out precious space as a long range threat. That's valuable enough to warrant immediate playing time.

When news broke about the Afflalo trade, it was egregiously met with short-sighted disapproval. But it's important to remember that the Magic didn't just receive financial flexibility: they also gained a pleasant little 21-year-old shooting guard prospect who will earn playing time almost immediately.