Afflalo's headed back to the Mile High City, ending the Magic's Draft night.

The Orlando Magic have officially traded Arron Afflalo to the Denver Nuggets, the team announced.

In the deal, Orlando conveys Arron Afflalo to Denver. In exchange, it receives Evan Fournier and the Draft rights to Roy Devyn Marble, whom the Nuggets picked 56th overall Thursday. 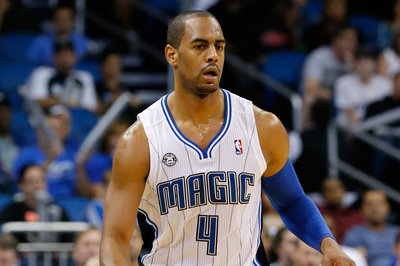 "We’re excited to welcome Evan and his family to Orlando," Magic general manager Rob Hennigan said in a statement. "We believe Evan’s intriguing blend of talent and skill will be a benefit to our backcourt and to the continued growth and development of our team. Roy had an outstanding collegiate career and we look forward to adding him to our team."

In two seasons with the Magic, Afflalo averaged 17.4 points, 3.7 rebounds, and 3.3 assists per game. He's coming off the finest season of his seven-year career. "Arron is a consummate professional and competitor," said Hennigan, "and we certainly wish him all the best."

In addition to Fournier and Marble, the Magic acquired Aaron Gordon (fourth overall) and Elfrid Payton (10th overall, via trade with Philadelphia) on Draft night. They parted with Afflalo, the Draft rights to Dario Šarić, a first-round choice in 2017, and a second-round choice in 2015.