If Orlando wants to make a move on Draft night, it certainly has the pieces to do so.

There's no indication that the Orlando Magic necessarily plan to make a trade on June 26th, the night of the 2014 NBA Draft, but they have the assets to complete such a deal if they so desire. Here's a quick look at Orlando's Draft night war chest.

Arguably Orlando's most viable trade chip, Afflalo has value due to his combination of productivity, age, and affordability. Coming off the finest season of his career, one in which he shouldered a great offensive burden with renewed efficiency, the 28-year-old swingman could prove attractive to lottery teams with an eye on a postseason run in the 2014/15 season. Consider: of the 18 players to average at least 18 points, three rebounds, and three assists per game in 2013/14, Afflalo ranked 10th in True Shooting (57.4 percent) and first in three-point accuracy (42.7 percent). 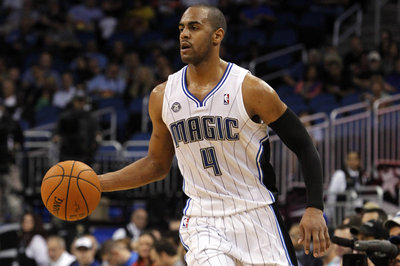 Rumors have already linked the Charlotte Hornets, who own the ninth overall pick in Thursday's Draft, to Afflalo. Other teams in situations similar to Charlotte's include the Sacramento Kings (eighth) and the Phoenix Suns (14th and 18th). A first-round pick, particularly one in the lottery, would make an excellent return for Afflalo.

The Magic can afford to part with Afflalo, despite his high character, great work ethic, and importance to their offense, because of the presence of Victor Oladipo, the second overall pick a year ago. Another factor making Afflalo expendable in the right trade: at 28, he figures to be past his prime years once Orlando returns to playoff contention.

The Magic's first-rounder in 2012, Nicholson floundered in his second professional season as Orlando attempted to expand his range to the three-point arc. He lost minutes to both Kyle O'Quinn and Tobias Harris as his sophomore season progressed, and it's fair to wonder whether Orlando is the right team to develop his talents, given the investments to those other two prospects at power forward.

But Nicholson, despite his faults, has at least one near-elite skill: back-to-basket scoring. And though there's certainly debate about whether that skill even matters in today's NBA, given the increased emphasis teams place on having power forwards who can both run and space the floor, Nicholson can nonetheless draw a second defender to the ball, a skill always in vogue.

Because of his sophomore slump, the Magic probably can't hope to get a pick in the range where they picked Nicholson in 2012--they took him 19th overall--but perhaps a team picking in the back quarter of the first round would be willing to surrender a pick for the St. Bonaventure product's services. The Magic could also add Nicholson to an Afflalo deal as a sort of sweetener.

These two veterans have little on-court value, but their non-guaranteed deals could allow a potential trade partner to free nearly $4 million in salary-cap space. According to ShamSports' salary database, the contracts which Maxiell and Price signed with Orlando will not become fully guaranteed until July 10th, meaning they can be waived before that date for no financial penalty.