An injury may have affected the highly touted prospect's stock.

Share All sharing options for: NBA Draft 2014: Joel Embiid could slip to Orlando Magic due to right foot injury

Kansas center Joel Embiid, arguably the top prospect in the 2014 NBA Draft, has sustained a stress fracture in his right foot, his agent Arn Tellem told ESPN. Embiid will undergo surgery Friday and will not participate in any more pre-Draft workouts. 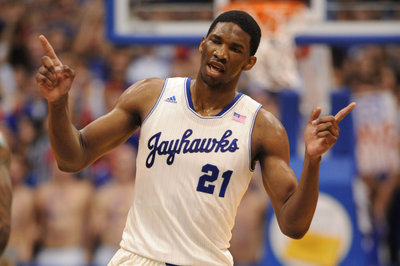 In an interview with Campus Insiders, DraftExpress president Jonathan Givony says he expects the Cleveland Cavaliers, who own the first overall pick in the Draft, to look elsewhere with that selection if their medical staff determines Embiid's foot injury will dog him for the duration of his NBA career.

A shake-up at the top of the Draft would certainly affect the Orlando Magic's Draft plans, and indeed Givony's latest mock Draft projects the Cameroonian seven-footer to slip to Orlando with the fourth overall pick.

Embiid averaged 11.2 points, 8.1 rebounds, 1.4 assists, and 3.5 combined steals and blocks in his freshman season at Kansas. He shot 62.6 percent from the field.