NBA Draft 2014: Joel Embiid impressive in workout, according to reports

The possible top pick in June's NBA Draft allayed fears about his back with a strong showing in a workout Friday, reports say.

Share All sharing options for: NBA Draft 2014: Joel Embiid impressive in workout, according to reports

Kansas center Joel Embiid took part in an NBA Draft Workout on Friday and, by two accounts, fared exceptionally well. The seven-footer missed the Big 12 and NCAA Tournaments due to a back injury, and concerns regarding his back increased when he elected to skip the NBA Draft Combine. 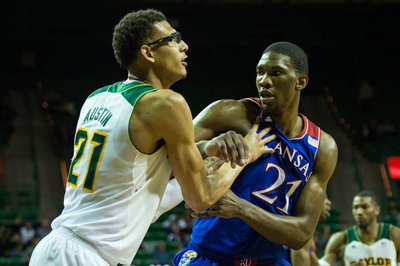 The Kansas center posted impressive numbers as a freshman. How did he fare against the sort of players he's likely to face in the NBA? A DraftExpress video explores that question.

According to Adrian Wojnarowski of Yahoo! Sports, it's "impossible to imagine passing on [Embiid] at No. 1" after watching the workout, which "league executives also attended, live. Meanwhile, ESPN Insider analyst Chad Ford offered a positive assessment of his own.

"Added muscle, still has quick feet & a beautiful jumper," Ford wrote. "No evidence of back issues." Ford also reports that Embiid told him "his back is 100 percent."

The Orlando Magic own the fourth pick in the 2014 NBA Draft, but based on these new reports, it seems unlikely Embiid will be available when they select.

The Cleveland Cavaliers, Milwaukee Bucks, and Philadelphia 76ers own the first three picks in that order, and it's not difficult to imagine any of them selecting the talented Cameroonian.