If the Magic want to land one of the league's best and most unique players in Love, one analyst suggests they offer Minnesota this deal.

Any team hoping to acquire Kevin Love, a three-time All-Star, from the Minnesota Timberwolves via trade will have to put together a stellar offer. Zach Harper, writing a guest piece for ESPN.com, put together a Love-centric trade offer for each of the league's other 29 teams, and according to Harper, the Orlando Magic would have to pay a pretty steep price for the privilege of landing the versatile big man. 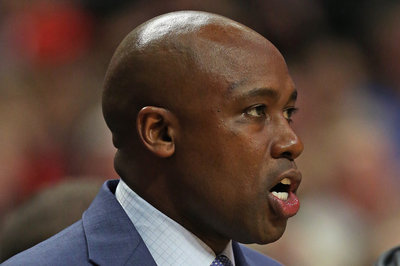 In this Ty Tuesday column, Tyler Lashbrook dishes on the possibility of Orlando's trading for a superstar, like Love, in order to accelerate its rebuilding process.

"I recognize that the Wolves getting the No. 2 pick from last year's draft plus the No. 4 pick in this draft seems like a lot," says Harper, "but Love is a lot better than Oladipo and it's not all that close." He notes, however, that Minnesota president Flip Saunders "was enamored" with Oladipo, the eventual runner-up to Michael Carter-Williams in the Rookie of the Year chase, and might be interested in acquiring him in a Love deal, even if it means shipping Minnesota's own 2014 first-rounder to the City Beautiful.

Making a play for Love would prove tricky, given that he is likely to decline his team option for the 2015/16 season in order to become a free agent. He'll certainly command a maximum-value contract on the open market.

The question for any team looking to acquire Love, then, is whether the opportunity to secure the 25-year-old for his prime season is worth the risk of dealing a small fortune's worth of assets only for Love to depart after one season.

In his six-year career, Love has posted per-game averages fo 19.2 points, 12.2 rebounds, and 2.5 assists on 45.1 percent shooting from the floor and 36.2 percent shooting from three-point range. His combination of three-point range and rebounding acumen makes him one of the league's most unique, and valuable, players. Despite his prodigious talents and an increasingly strong supporting cast which includes Ricky Rubio and Nikola Peković, Love has never played in the postseason, raising questions about his ability to serve as a franchise cornerstone.