A new metric suggests that the Magic guard could become one of the most productive players in the 2013 rookie class.

Share All sharing options for: Victor Oladipo projects to have a bright NBA future, analyst says

Andrew Johnson of Hickory-High posted a story Friday which aims to suss out which factors best predict the future success of NBA prospects. Using historical Draft data, the players' college statistics, and those players' production as NBA rookies, Johnson concludes the following:

Where does Oladipo stand in Magic rookie history? 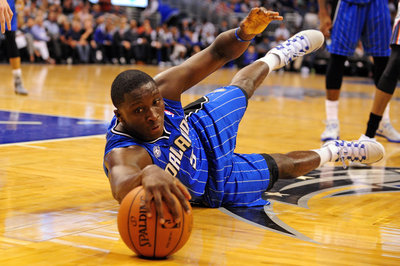 One of the key pieces in Orlando's rebuilding effort stood out in his first pro season.

[A]bout 60% of the predictive ability comes from rookie production, 30% from the P-AWS [Adjusted Win Shares] draft model and 10% from total minutes played as a rookie.

Don't let the math stuff throw you off. In a nutshell, it's good news for the Orlando Magic and Victor Oladipo, whom they selected with the second overall pick in the 2013 NBA Draft.

According to Johnson's numbers, Oladipo projects as the 2013 rookie class' second-most productive pro, trailing only Utah Jazz point guard Trey Burke. Further, the Indiana product has an eighty percent chance of becoming a "quality starter," a term which Johnson defines "having a stabilized AWS of 5." He says that finding stars is a weakness of the AWS model, but it does identify "solid players" well.