NBA Draft Combine 2014: Orlando Magic interview Julius Randle and others, according to report

Through two days at the Combine, the Magic have been busy interviewing players, a report says.

Share All sharing options for: NBA Draft Combine 2014: Orlando Magic interview Julius Randle and others, according to report

The Orlando Magic have met with a host of pro prospects at the NBA Draft Combine in Chicago, reports Josh Robbins of the Orlando Sentinel.

The case for Julius Randle 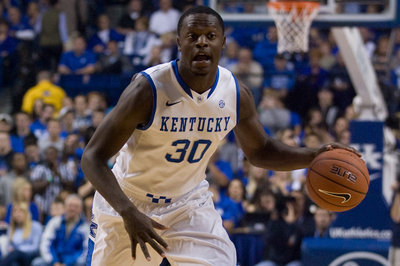 If the Magic made some adjustments to their lineups, the Kentucky product could fit nicely with them.

The team attempted to schedule an interview with Michigan two-guard Nik Stauskas, but were unable to do so owing to the sharpshooter's packed schedule. The Magic can still invite him to Orlando for a meeting later in the pre-Draft process.

As Robbins notes, Exum, Randle, Smart, and Vonleh are arguably the most talented prospects participating in the Combine. Joel Embiid, Jabari Parker, and Andrew Wiggins, three other collegiate stars projected to go high in the lottery, did not attend the annual event.

The Magic will learn Tuesday where they'll select in the 2014 NBA Draft. That night the league will conduct its Draft Lottery. Orlando has a 15.6 percent chance of winning the top pick, and will not select lower than sixth overall.