Nikola Vučević's future is on the block, not behind the three-point arc

Given the progress he's made as an interior scorer, the Magic probably won't ask their budding star center to extend his range beyond the arc.

Share All sharing options for: Nikola Vučević's future is on the block, not behind the three-point arc

Given Nik Vučević's facility as a jump-shooter--the USC product has connected on 44.5 percent of his long two-point attempts in the 2013/14 season, according to NBA.com/stats, while taking 4.5 such shots per game--Orlando Magic fans sometimes wonder if the seven-footer might develop into a three-point shooter as his career progresses. After all, the league has trended away from traditional, back-to-basket big men in recent years, valuing more highly bigs like Kevin Love, Ryan Anderson, and Channing Frye who can step beyond the arc and shoot treys.

While Magic coach Jacque Vaughn has seen that trend and acknowledges the value in having such a player, he said Saturday that Orlando's plan for Vučević doesn't involve extending his shooting range beyond the arc.

"I'm not sure we wanna take him there," said Vaughn before the Magic took on Love's Minnesota Timberwolves. "I think the next phase for him is to become extremely comfortable on the block."

Man in the middle 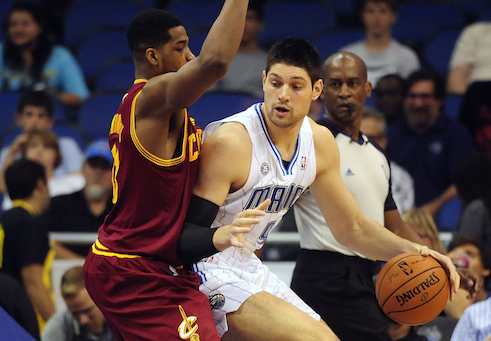 There's no question that Nik Vučević has become a more natural post scorer since joining the Magic.

And according to Vaughn, Vučević has "without a doubt" made progress as a back-to-basket player, even drawing double-teams in recent games against the Toronto Raptors and the Charlotte Bobcats. "I think the rest of the league is seeing it also," Orlando's second-year coach said of Vučević's post ability.

The data from mySynergySports.com embedded in this post attest to the strides Vucevic has made in his low-post game. Vaughn credits Vučević's improvement, specifically with his footwork and up-and-under move, to his willingness to work with the team's coaching staff. Eventually, said Vaughn, post play "will become natural for him."

That Vučević has made strides on the interior may come as a surprise to those who watched his collegiate career. Vaughn indicated the scouting reports on the Montenegrin leading up to the 2011 NBA Draft pegged him as a jump-shooter instead of a "banger" or a "shot-blocker," to use the coach's terms.

The possibility of the Magic's trying to make him a three-point shooter remains remote, but Vaughn wouldn't rule it out completely. "If we saw that was an area he could help us out with, sure, we'd push him there," he said. But for now, Orlando's focus remains on further honing Vučević's surprisingly strong skills on the inside.