The 24-year-old big man approached Saturday's game like any other.

Before tipoff of Saturday's game against the Minnesota Timberwolves, Orlando Magic big man Dewayne Dedmon gave the air of someone fully at ease. He sat at his locker stall and fielded questions from reporters with his typical good humor. He joked with Andrew Nicholson, whose locker stall stands next to his, about how cluttered Tobias Harris' own locker is and the frequency with which he has to shove Harris' gear aside to make room for himself. He playfully attempted to dodge a video crew that frequently asks Magic players offbeat questions before games. In short, Saturday seemed like a typical day for the rookie from USC.

Except it wasn't. In a little over an hour, Dedmon would make the first start of his NBA career, a fact he only learned during the team's walkthrough earlier in the afternoon. A sore Achilles' would sideline Nik Vučević for the second straight game, affording Dedmon the opportunity to mark a milestone in his brief NBA career. 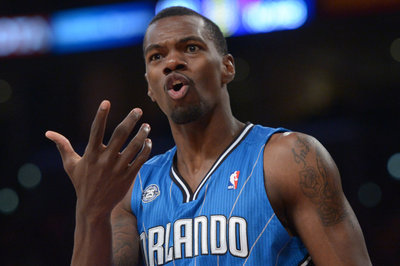 The rookie wants to stick in Orlando.

To hear Dedmon tell it, he had no reason to feel nervous as tipoff drew nearer. "I approach the same way," said Dedmon. "Just come in, bring a lot of energy, [and] continue to play how I've been playing."

Magic coach Jacque Vaughn said he was "very interested" to see how Dedmon fared in his first start.

"He does a lot of things that go unnoticed on the stat sheet," said Vaughn in his pregame media meeting. "You take, for instance, whether he just goes after an offensive rebound and maybe two guys have to box him out and we get the possession just from his ability to have energy and effort on every single play."

Indeed, the combination of energy and effort characterizes Dedmon's approach to and impact on the game. His Magic teammates have taken notice, lending credence to Vaughn's postgame claim that players enjoy working alongside the 24-year-old.

"He's gonna play hard no matter what," said ninth-year big man Jason Maxiell, who sometimes plays one-on-one against Dedmon and Nicholson before games. "He's a very athletic guy. He's very skilled with a great jumpshot, which amazed me at one point, learning, playing one-on-one, that he can knock down a jumpshot."

"He's a guy who plays within his role at all times," Jameer Nelson, now in his 10th NBA season, said. "He sets screens, rolls, and he'll get you open. He's there defensively."

Dedmon's performance Saturday didn't turn many heads: he picked up two fouls in the game's first three minutes and would play just 10 more minutes the rest of the way, finishing the night with two points, six rebounds, and a steal on 1-of-5 shooting. Nelson joked that all he saw from Dedmon were the fouls he committed.

"I just got caught jumping when I should have stayed grounded," Dedmon said regarding his early foul trouble. "A couple of those fouls just kinda... I made mental mistakes for myself. I just have to move on and just go from it, figure it out." It took him until the third quarter, he said, to rein in his defensive tendency to leap at fakes.

Despite the limited minutes Saturday, Dedmon still managed to demonstrate his high-energy style: on one long first-quarter possession, he fended off Timberwolves defenders for three offensive rebounds before Arron Afflalo finally banged in a jumper to end the trip and score two points for Orlando. The sequence recalled Vaughn's earlier remarks regarding Dedmon's ability to impose his will on a game through sheer effort.

While there's no substitute for in-game experience, Dedmon has nonetheless benefitted from his one-on-one tilts against Maxiell and Nicholson.

"It's definitely good to play against good competition like Andrew and a veteran, Max," said Dedmon. "It definitely helps out as far as getting reps and working on your game." From guarding Nicholson, Dedmon said he's learned how to contest jump hooks "without fouling" in the post, for example, while Maxiell has taught him "subtle things the refs don't see" he can use at both ends of the floor.

Given that he could remain with the Magic for the next two seasons--according to ShamSports' salary database, those years of Dedmon's deal do not have full guarantees--Dedmon has plenty of time to learn and grow.

"I got more time than just 10 days to show what I can do," Dedmon said, "so it's definitely better." The seven-footer said he found himself pressing at times during his 10-day contracts with the Philadelphia 76ers and the Magic before Orlando elected to commit to him for the balance of the 2013/14 season and potentially beyond.

Dedmon doesn't have to press any longer. He may have found an NBA home in Orlando.