Here's how Orlando fared in the Worldwide Leader's first #NBAfrontofficerank.

Throughout the first week of April, the ESPN Forecast panel has broken down each of the league's 30 teams to assess the strength of their respective front offices. It kicked off that series of ratings Tuesday with an overall look at the league, which overview revealed ESPN's panel pegged the Orlando Magic as having the NBA's 18th-best overall front office.

Here's how the more specific breakdown, which accounted for ownership, executives, and coaches, treated Orlando. 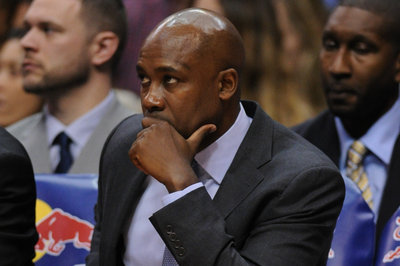 A digest view of how the members of the Magic's front office fared in ESPN's #NBAfrontofficerank.

Team owner Rich DeVos finished the ownership rankings in the middle of the pack, earning a 5.34 score from ESPN's panel, which graded on a 0-10 scale. That score places the Amway founder 16th in the league, one spot behind Vivek Ranadivé of the Sacramento Kings (5.36) and just ahead of Larry Tanenbaum of the Toronto Raptors and Tom Benson of the New Orleans Pelicans (5.11).

According to the ESPN panel, general manager Rob Hennigan is the greatest strength of Orlando's front office: his 5.86 rating placed 15th in the league, behind the Chicago Bulls' team of John Paxson and Gar Foreman (6.31) and ahead of the Los Angeles Lakers' duo of Jim Buss and Mitch Kupchak (5.79). Though Hennigan certainly deserves credit for getting the Magic's post-Dwight Howard rebuilding project off to a solid start, we'd be remiss to overlook the work Scott Perry and Matt Lloyd, his assistant general managers, do in their capacities.

With a score of 4.56, Orlando coach Jacque Vaughn finished 22nd in the coach rankings, sandwiched between first-year coaches Mike Malone of the Kings (4.60) and Brian Shaw of the Denver Nuggets (4.34). I don't envy the ESPN panelists' task of having to rate coaches on rebuilding squads, as it's tough to gauge any coach's ability when he doesn't have a fully stocked roster with which to work. The Magic's league-worst record since he took over certainly works against Vaughn, but not to such an extent that ESPN saw fit to rank him last.