Magic vs. Cavaliers notebook: Orlando not embarrassed despite blowout loss

Cleveland shot 57.7 percent and scored 64 points in the paint as it crushed Orlando by 21 on Wednesday, but coach Jacque Vaughn stood by his team.

Share All sharing options for: Magic vs. Cavaliers notebook: Orlando not embarrassed despite blowout loss

The Orlando Magic dropped their second straight game Wednesday, falling to the Cleveland Cavaliers by a 119-98 final in a game which was never all that competitive. Dion Waiters scored a game-best 26 points, but two other Cavs also crossed the 20-point threshold. Orlando yielded 57.7 percent shooting to the visitors on the night, and the 70 points it gave up in the first half set a new worst for any Magic half in the 2013/14 season.

You give those guys a lot of credit," said Magic coach Jacque Vaughn of the Cavaliers. "They were really intent coming into this game and [Cavs coach] Mike [Brown] had those guys ready to play. They were the aggressors and that's what it boiled down to."

"There's games throughout the course of the year when you just don't have it," Vaughn said later. "When it's coupled with the team like the Cavs, when they had it tonight, it just wasn't a good mix for us."

Vaughn still "proud" of his team

Despite the blowout margin, Vaughn stopped well short of saying his team's performance embarrassed him.

"I think everyone at the end of the day, when you go to work you take pride in what you do. I believe the men in the [Magic] locker room do take pride in what they do," said Vaughn. "They work extremely hard every day. Some days it's not your day over an 82-game season. I'll continue to push these guys and want the most and the best out of them.

"But am I embarrassed for them tonight? No. I am proud to be their coach." Jacque Vaughn on the Magic

"But am I embarrassed for them tonight? No. I am proud to be their coach and we'll get back at it. We'll talk about it tomorrow when we get to Charlotte. We'll have shootaround and we'll be ready to play again."

A frustrated Tobias Harris indicated the Magic had myriad issues Wednesday, and he called his team's defensive performance in particular "terrible." Another ghastly stat for Orlando: it gave up 64 paint points.

Second-year shooting guard Doron Lamb notched a career-high 14 points against Cleveland, offering Orlando a rare bright spot in a mostly dim effort. The Kentucky product shot 3-of-5 from the field--all of his attempts came from three-point distance--and 5-of-5 at the line in 24 minutes off the bench.

"I just made my open shots," said Lamb, who added that he approached Wednesday's game the same way he has every other one in the 2013/14 season. "That's my role on this team: make open shots [and] make plays for my teammates."

Though he had a few hiccups--four turnovers among them, including two in which he stepped on the sideline--he nonetheless posted the finest overall performance of his career, impressing his coach.

"His shot preparation was really good tonight," Vaughn said, praising the 22-year-old for "sprinting" to his spots in transition in order to ready himself for a kick-out pass. "I think our penetration [and] our bigs rolling to the rim made them react a little bit and he got some open shots. He's done a good job of getting better every day."

Lamb didn't figure into Vaughn's playing rotation early in the season, logging only 99 minutes across 13 appearances in Orlando's first 52 games. Since the calendar flipped to 2014, however, Lamb has averaged 13.2 minutes per night and connected on 44.4 percent of his three-pointers. The role in which Vaughn places him, as well as how he fits into that role, bears watching as Orlando closes out its season.

Harris leads Orlando in scoring (17 points per game) and in True Shooting percentage (59.4 percent) since the All-Star Break, but he logged only 21 minutes off the bench Wednesday, and he sat the duration of the third quarter. As a result, Harris' raw stats of 11 points and seven boards on 5-of-8 shooting looks muted, but anyone watching him against Cleveland understands he made a positive impact for his team.

In a game his team lost by 21 points, Harris notched a plus-seven individual plus-minus differential, making him the only Orlando player with a positive mark in that category.

"It's tough. As a player, I know myself, I wanna be out there. I wanna help our team in certain situations," said Harris. "But sometimes you just can't control it."

"I know personally, myself, sitting the whole third [quarter] and getting in the fourth [quarter], it's just 'work,'" Harris said of his approach to the final frame. "For myself [and] for my team to try to chip away."

Given the Magic's rebuilding situation, fans will no doubt wonder if cutting the minutes of one of the team's best players in the season's final weeks signifies an intentional shift toward losing. Harris' workload down the stretch certainly bears monitoring. 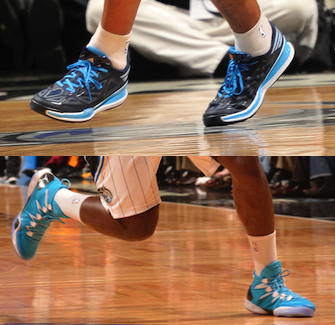 Wednesday marked World Autism Awareness Day, and two Magic players noted the occasion by wearing special colorways of their sneakers. As he promised via Twitter he would, Arron Afflalo sported a royal-on-navy colorway of the adidas Crazy Light 3 low. Meanwhile, Victor Oladipo went Carolina-on-royal, though his model of choice was the Jordan XX8 SE.

Blue is the color associated with World Autism Awareness day, and the organization Autism Speaks started a Light It Up Blue campaign.

Afflalo said he became of autism within the last few years due to televised specials on ESPN. "Those stories always seem to be feel-good stories," he said. "I thought it'd be a good thing to tweet about and wear the new shoes for."

To learn more about autism and how you can help raise awareness, please visit www.autismspeaks.org.