The Sixers point guard captured his fourth Rookie of the Month award.

The NBA announced Friday that Philadelphia 76ers point guard Michael Carter-Williams earned Eastern Conference Rookie of the Month honors for April, besting a field of nominees which included Orlando Magic guard Victor Oladipo word. The award is Carter-Williams' fourth of the season, making him and Orlando's rookie the only Eastern players to capture it in the 2013/14 season. Oladipo won the award in December and in February.

The Starters break down Rookie of the Year 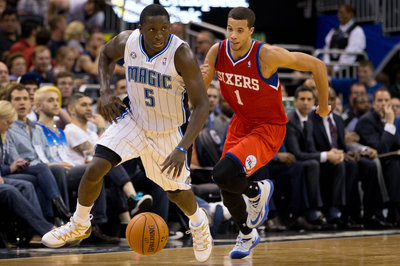 The Starters crew offers its take on the Rookie of the Year race between Victor Oladipo, Michael Carter-Williams, and Trey Burke.

Following the conclusion of Orlando's season on Wednesday night, Oladipo said he planned to give his Rookie of the Month trophies to his mother. He had been keeping them in his locker stall at Amway Center.