We look back at how we thought Orlando would fare in the 2013/14 season. In what ways did the Magic surprise us, and in what ways didn't they?

Back in Orlando Pinstriped Post's 2013/14 Orlando Magic season preview story, I offered some predictions about how Orlando's 25th NBA campaign might unfold. With that season having just concluded Wednesday, now seems like the most opportune time to review some of those predictions to see what we got right and what we got wrong. Let's begin.

The Magic finish 23-59--a three-game improvement from their 2012/13 campaign--but do not seriously contend for the league's worst record, owing to the Philadelphia 76ers' depleted roster. They will again bring up the rear in the Southeast.

How it went: I indeed got the Magic's record exactly right, but I'll admit that I sort of stumbled into this one. In October, I had no idea that Nik Vučević--arguably the team's best player, depending on how one assesses Arron Afflalo--would miss 25 games due to a battery of injuries. Had he played a full season, the Magic might have approached the 30-win mark.

I did call the Sixers' being terrible, and they indeed finished with the league's second-worst record and tied the NBA mark for consecutive losses, dropping 26 straight at one point. Somehow, the Milwaukee Bucks--who by no means intended to tank--finished four games behind Philly for the league's worst record.

Orlando finished in the Southeast's cellar for the second straight year.

[T]he team makes strides defensively, but still finishes in the bottom third of the league.

The biggest reason for the strides Orlando made defensively: it forced slightly more turnovers and allowed fewer offensive rebounds.

The offense continues to stagnate and the team finishes in the bottom five on that side of the ball.

How it went: Called it. Only the Sixers scored fewer points per 100 possessions than the Magic did in the 2013/14 season. With no single player capable of creating high-percentage shots on a consistent basis, Orlando had to rely on pitch-perfect execution of its pindown-heavy sets in order to get good looks. The team doesn't have a high margin for error on its screens, cuts, passes, and reads.

Having outlined those weaknesses, we should at least acknowledge that Orlando addressed its free-throw woes one season after nearly setting a league record for futility at the charity stripe. Thanks in large part to Victor Oladipo, as well as to improvements from Afflalo and Vučević, the Magic posted a free-throw ratio--computed as free throws made per field goals attempted--of 19.3 percent, a marked improvement over the 14.9 mark from their first rebuilding season.

[Tobias] Harris thrives in a sixth-man role, using a more patient offensive approach to knife up opposing second units on a consistent basis.

Tobias Harris goes on the attack against Spurs 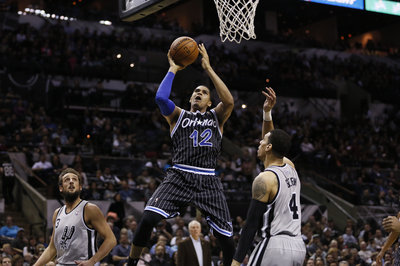 Tobias Harris is at his offensive best when he attacks the basket off the dribble. Orlando Pinstriped Post takes a closer look at that trend with this video breakdown of one of his best outings of the season.
How it went: Harris' first full season in pinstripes got off to an uneven start due to an ankle injury he suffered in the preseason. He made his season début on November 24th, aggravated the injury, and wouldn't play again until December 13th, and needed time to round into form.

But Harris did ultimately meet those expectations. He shifted to a sixth-man role for the Magic's final 19 games, averaging in those appearances 14.3 points per game in just 25.8 minutes. He shot 51.2 percent from the floor and hit 38.5 percent of his three-pointers, albeit on only 1.4 tries per game in that span.

Harris' overall averages pale in comparisons to the ones he posted after arriving via trade from the Milwaukee Bucks in February 2013, but don't be fooled: he adapted nicely to a more complementary role on offense and he figures to be one of Orlando's go-to scorers as his career progresses.

[Rob] Hennigan deals, in descending order of likelihood, Afflalo, [Glen] Davis, or [Jameer] Nelson to a contender in need of stability and productivity off its bench.

How it went: The Magic didn't make any trades this season, so Afflalo and Nelson finished the year in pinstripes. Hennigan did manage to buy out Davis and Hedo Türkoğlu, which moves freed up some minutes for Orlando's younger players, but I can't say that I got this call right.

The Magic will sign Adonis Thomas and Dewayne Dedmon to two 10-day contracts each, and then keep Dedmon for the rest of the season.

How it went: Just kidding. I'm only checking to see if you're still with us.

Oladipo finishes the season with nearly as many turnovers as assists, but comes away from the experience a more versatile and confident player for it.

How it went: I suppose one could say I got this one half right. Splitting his time between point guard and shooting guard, the Magic's top rookie registered 327 assists to 256 turnovers, a 1.3-to-1 ratio. That mark is by no means ideal, but it exceeds the meager expectations I had for him as a playmaker.

But there's really no disputing that Oladipo's long shifts at point guard helped his confidence and will pay dividends as his career progresses. He still has issues with picking up his dribble too early and choosing the difficult pass over the easier one, but plenty of young players also fall into those traps. With film study and more reps at the point, he'll continue to improve his on-ball offense.

We've looked at how my Orlando predictions held up or didn't hold up. Let's talk about yours: what did you expect from the Magic in the 2013/14 season, and how did they meet or not meet those expectations?