Ty Tuesday: Looking ahead at the Orlando Magic's rebuild

How can the Magic take the next step in their rebuilding process? Tyler Lashbrook dishes on that topic in the latest Ty Tuesday.

Share All sharing options for: Ty Tuesday: Looking ahead at the Orlando Magic's rebuild

It's hard to believe, but the Orlando Magic are one game away from being two full seasons into the rebuilding process. In two years, the roster has transformed from a club full of Otis Smith's spare parts to Hennigan's young guns, sans Jameer Nelson. Those shiny, new Corvettes have produced precisely 120 losses, 121 if the Indiana Pacers take care of business like it should on Wednesday.

But that's kind of the point: lose a lot now and thrive later. But how will Orlando thrive? That question is the murky, unknown future of rebuilding. You can practice patience and preach diligence, but everything needs to come together at some point. That's the hope, at least.

Rebuilding in the NBA happens one of two ways. Let's take a closer look.

Lose enough to win a high Draft pick and select a franchise-caliber player.

This approach what happens when you're lucky enough to land Kevin Durant or LeBron James. The upcoming Draft is great. Players in the top-10 range all have potential immediately impact whatever teams choose them. And there are a bunch of guys in the 10-25 range who could potentially have long, meaningful NBA careers.

There is no Kevin Durant or LeBron James in this Draft

But there is no Durant or James in this Draft. James took the Cleveland Cavaliers from 18 wins to 35 in his first season. A 17-game turnaround is unbelievable, especially when it happens because of the addition of 18-year-old. Durant didn't turn the Seattle SuperSonics around in his first season, but he's somehow improved to the point that you aren't crazy for saying he's better than James.

Jabari Parker and Andrew Wiggins are both fantastic prospects. But compare their bodies of work at college and you understand that neither was nearly as accomplished as Durant in his only season at Texas. Durant averaged 26 points, 11 rebounds, 1.5 assists, 2.1 steals, and 2.1 blocks on 47 percent from the field and 40.4 percent from deep. That's absurd. Durant was a budding superstar.

Collect enough assets to trade for a high-impact superstar.

Think about what the Houston Rockets did in trading for James Harden. Daryl Morey signed players to reasonable contracts, drafted well, accumulated picks and then made a package that was strong enough for the Oklahoma City Thunder to react.

In this scenario, a team must stay financially flexible and must be able to read and react to the market around them. This is similar to what Hennigan has already built in Orlando. There are pieces here--Nikola Vucevic, Tobias Harris, Arron Afflalo and Victor Oladipo--on bargain contracts that would garner a ton of trade interest if they were made available. 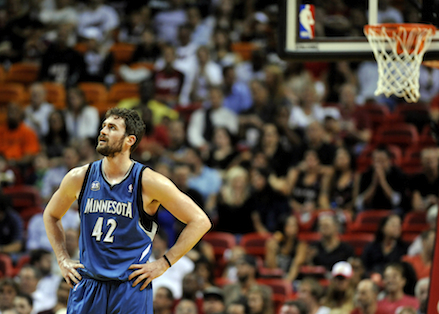 It's impossible to know exactly what the Magic think of those pieces moving forward, but it's reasonable to assume that, for the right price, anyone would be made available. If the Minnesota Timberwolves seriously look to move Kevin Love, then why wouldn't Orlando be a player in those discussions? With their stockpile of future picks, two lottery selections joining the part in June, and current group of players, Orlando could put together a package of assets as strong as anyone in the league.

Love has his faults as a basketball player, but he is a bonafide superstar and snagging him would automatically make Orlando a sexier choice for upcoming free agents. Again, think of Houston. Would Dwight Howard have signed with Houston without Harden? Most likely not. But having that first superstar makes it a lot easier to nab the second. The Magic don't have to make a move for Love, but his sticky position in Minnesota and pending free agency is exactly the type of situation Orlando could take advantage of.

There are, of course, other ways to rebuild. You can save up cap space then splurge on free agency, but I consider that more of retooling than building. Or you can go the Indiana route: Groom a superstar wing with a stable core of veterans other young talent, let them grow and see what happens. It's an admirable course, but it's also extremely difficult. It requires nailing every high draft pick. Orlando can do that with its two lottery picks this summer.

Making the right two picks in this upcoming draft is so important. It will tell a lot about the direction of the program. Can that group, with the two rookies added on next season, grow into a potential playoff team next season? Or is that group a mish-mash of talented players who will never quite make the strides into championship contention? If it's the former then maybe Orlando can stay the course and watch them grow. If it's the latter then a rebuild via packaged trade might be the move. For now, though, all we can do is wait, which is the hardest part.