Magic vs. Wizards notebook: Washington too physical for Orlando to handle

The Wizards' hit-first style wore on the Magic as Friday's game progressed.

Share All sharing options for: Magic vs. Wizards notebook: Washington too physical for Orlando to handle

The Orlando Magic nearly matched a season-high with their third straight win Friday, but fell apart in a dismal fourth quarter against the Washington Wizards to lose by a 96-86 final. In the decisive final frame, the Magic shot 4-of-15 for 16 points and faced a 12-4 deficit in the glass as Washington first pulled ahead of, and then away from, the hosts.

At Friday's shootaround, Orlando coach Jacque Vaughn said he was "interested to see" how the Magic's bigs would contend with Washington's physical frontline of Marcin Gortat, Nenê, and Trevor Booker word. Early in the game, his young charges appeared to pass that test with ease: Orlando held a 19-9 edge on the glass and tallied as many offensive rebounds, six, as Washington did defensive ones.

But as the game progressed, the Wizards improved their intensity and effort level, leading to their winning two key battles. Washington finished with a 44-42 edge on the boards and a 56-40 edge on points in the paint. Magic bigs Dewayne Dedmon and Andrew Nicholson combined to shoot 3-of-15 from the floor. Kyle O`Quinn at least met the challenge, shooting 6-of-9 from the floor including, per NBA.com/stats, 5-of-7 inside the restricted area.

"I think their physicality ended up catching up to us," said Vaughn from the podium in Orlando's interview room following the game. "I think that was a big part of it [....] Overall their physicality started to catch up and give them credit for that."

To the second-year head coach's point: despite playing harder and with a hit-first mentality, the Wizards committed 12 fewer fouls than the Magic did on the night, and earned nine more free-throw attempts. Nicholson fouled out, and two more Magic players committed five personal fouls apiece.

"Being at the four position, I've seen a lot of opportunities in other games where, on a pick-and-roll, I could slip out," said Magic forward Tobias Harris, who tallied 10 points off Orlando's bench. "But they were staying attached for most of the game, pretty much kind of denying me, so it was tough to really get any type of rhythm where I wanted open space on the court."

Magic point guard Jameer Nelson said the Wizards "turned the pressure up a little bit and got a little more physical" in the second half, leading to Orlando's collapse. The Magic's 13 second-half turnovers yielded 15 Washington points. In a half the Wizards won by 16 points, those mistakes loomed large over the outcome.

Orlando gave up 51 points after intermission, but just as problematic is the 35 it scored in the same timeframe, especially on the same night it hung 29 on its opponent in the first period alone. When asked what the Magic needed to change to get better shots in the second half, the players to whom Orlando Pinstriped Post spoke offered a uniform response.

"We just have to be honest with ourself and move the ball," said Nelson. "Not play hero basketball. Get the ball to the second and third side. When we do that, we're pretty good. You move the defense."

The Magic recorded assists on just five of their 10 buckets after halftime, as compared to 16 of their 22 before the break, attesting to the strength of Washington's concerted effort to contain the ball.

Orlando's all-time assist leader came close to recording the first triple-double of his career, now in its 10th season. Nelson finished Friday's contest with 12 points, seven rebounds, and 11 assists. He helped get the Magic off to their strong start with five boards and six assists in the opening frame. 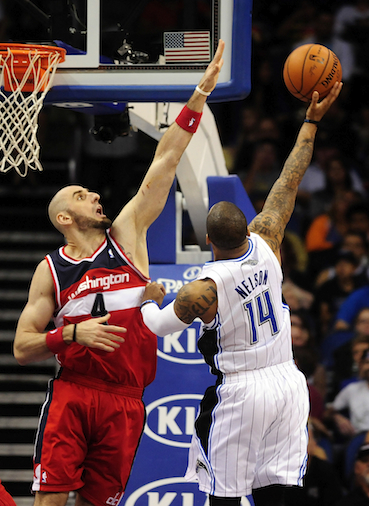 "I was just trying to get in the paint," Nelson said. "When I'm aggressive [and] getting in the paint, I'll make the right play, whether it's for me to score or shoot the ball or pass the ball. I was out there taking what the defense gave me, honestly."

Nelson said he was "aware" that he was on the verge of a triple-double, crediting Magic big man Jason Maxiell for keeping him apprised of the benchmarks he needed to hit. "He's always telling you when you get off the court, 'you need three more rebounds to go!' He's one of my good teammates, so he kept me focused."

Nelson might have reached that rare figure--only 13 players in Orlando history have ever tallied a triple-double--were it not for a few tumbles he took going for rebounds in the second half. He recalled Harris taking a few boards away from him as he crashed to the floor--"which he should," Nelson said--and O'Quinn snared one from his reach in the fourth quarter.

Victor Oladipo tallied the most recent triple-double in team history, going for 26 points, 10 rebounds, and 10 assists in a double-overtime loss to the Philadelphia 76ers on December 3rd. That performance ended a Magic triple-double drought which spanned nearly three years.