The veteran swingman broke out Wednesday for a strong performance, which he said has suffered of late due to how poorly Orlando's season has gone.

Perhaps no player in the Orlando Magic's locker room takes losing harder than Arron Afflalo. In one-plus Magic seasons, he's endured 117 defeats, or nearly as many as he faced in his four previous seasons as a member of the Denver Nuggets and the Detroit Pistons (132). And at 28 years old, he's at a stage of his career where he'd much rather compete for a championship than try to scrap for an early-April victory over a shorthanded playoff team, as he helped his Magic do Wednesday against the Brooklyn Nets.

Afflalo: "I haven't been that impressive" lately 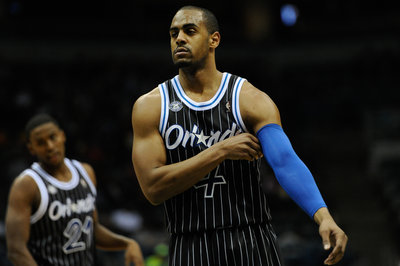 The seventh-year player is the first to admit his play has dropped off after a strong start.

Afflalo stood out for the Magic in that game, scoring a team-high 25 points on 9-of-16 shooting to improve Orlando's record to 23-55 on the season. That scoring output marked his highest since he hung 32 on the New York Knicks in a double-overtime Magic win on February 21st, a span of 17 games. It took some doing, but the UCLA product finally busted his slump.

Against Brooklyn, Afflalo played with more aggression and energy than he had in recent weeks: he scored 11 first-quarter points to buoy an otherwise flagging Magic offense, and in the second half he dove out of bounds just in front of Orlando's bench in an attempt to save a loose ball, earning a nasty bruise on his right hip for his troubles.

Afflalo acknowledged that his approach Wednesday was "a little different" than it had been of late. "These last five games [of the season], I need to make sure I show up," he said. "Just close out the season strong."

After his big night against the Knicks, Afflalo missed five games due to a sprained ankle. Upon returning to the lineup, he said Wednesday, he didn't play the same way he did when the season began.

"Playing weeks and months ahead of time without that hope, so to speak, that you can actually compete for a championship this year, it's difficult." Arron Afflalo

"My mindset kinda slightly changed just because of the nature of our season a little bit," said Afflalo. "Not being competitive for the playoffs, it was kind of a difficult thing to handle. That's just a maturity thing on my end. I still gotta show up and play, compete, and go hard."

Afflalo underlined that every team's goal is to win a championship. That Orlando never seriously contended for a playoff berth, let alone a title run, wore on him.

"You wanna have the hope that you can at least have that chance [to win a championship] until the final day," he said. "So playing weeks and months ahead of time without that hope, so to speak, that you can actually compete for a championship this year, it's difficult."

His challenge now: remain sharp both mentally and physically as the Magic's season winds down.