Watch: Tobias Harris goes on the attack against the Spurs

Share All sharing options for: Watch: Tobias Harris goes on the attack against the Spurs

Tobias Harris came off the Orlando Magic's bench Saturday for just the seventh time in the 2013/14 season and the first time in their last 15 games. Coach Jacque Vaughn made that move in order to slot Kyle O'Quinn into the starting lineup at power forward, the better to match up with the San Antonio Spurs' big frontline of Tiago Splitter and Tim Duncan.

More on Tobias Harris: Searching for the right role Thriving without Glen Davis

And Harris had no trouble excelling in a reserve role, tallying a team-best 23 points on 11-of-16 shooting as Orlando fell by a 121-112 final. Harris looked in his element against the Spurs' vaunted defense, which entered the game allowing 100.4 points per 100 possessions, which NBA.com/stats data indicate is the fourth-best mark in the league. 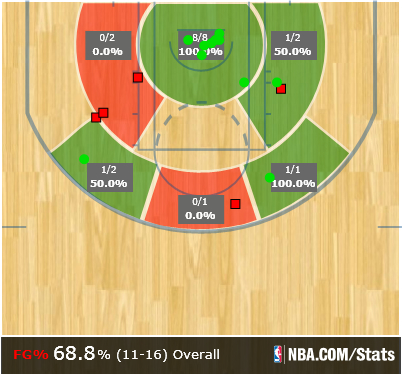 Tobias Harris shot 8-of-8 in the paint against San Antonio in Saturday's loss.
Image via NBA.com/stats

The video above shows all eight of Harris' shot attempts in the painted area during Friday's loss; he converted each of those shots; you're welcome to provide your own soundtrack, but we recommend Sleigh Bells' "Riot Rhythm."

In the clips below, Orlando Pinstriped Post will break down in greater detail what made Harris particularly effective against the defending Western Conference champs.

Harris made an impact on the game 20 seconds after checking in, scoring with a signature move, of sorts: the Tennessee product grabbed a defensive rebound and pushed the ball up the floor. When he noticed that Boris Diaw picked him up in transition near midcourt, Harris used his speed advantage to beat him to the basket and then finished through the contact for an and-one.

In this second clip, Harris went to work in the post against Manu Ginóbili, against whom he has a significant height advantage. Note that Harris could have shot a jumper immediately after facing up the three-time NBA champion, but instead of settling for that shot, he endeavors to get to the rim, where he creates separation from Ginóbili and finishes through some contact.

Harris stayed on the attack again on this simple pick-and-pop set, which Orlando point guard Jameer Nelson read beautifully to set up his teammate. Kawhi Leonard's aggressive trap on Nelson leaves Harris open as he popped to the weak side the floor. Nelson recognized Leonard's mistake and fed Harris the ball. He easily gets his shoulders past Leonard, who has earned notoriety for his defensive acumen, and drives to the rim for two points.

Harris benefitted from another great pass for his last basket of the game, a layup off an E'Twaun Moore feed. Moore cut to the rim as Nik Vučević faced up Splitter, which cut drew Leonard off of Harris. Instead of leaving Nelson in the right corner, Tony Parker stayed with him, leaving Harris free to cut unimpeded for an easy deuce.

These plays all highlight Harris' greatest strength: his relentlessness in getting to the rim for high-percentage looks. He supplemented these plays with several transition opportunities as well as one tip-in. That assists set him up for the final two shots we've embedded in this post refutes the idea that he needs to dominate the ball in order to score efficiently and at a high volume.

Harris' ability to create for himself in transition works to Orlando's advantage, but the Magic can't always count on fast-break opportunities to generate easy scores. He has to play efficiently in half-court settings as well. His performance Saturday demonstrated facility scoring in both open- and half-court settings. Regardless of whether he starts or comes off the bench, Harris will continue enjoying success if he maintains the aggressive approach he adopted against San Antonio.