Some of the best players expected to enter the 2014 NBA Draft performed well in Saturday's games.

Three of the top players in NCAA basketball put together great games for their teams Saturday, a little less than four months before the 2014 NBA Draft. The lottery-bound Orlando Magic certainly have their eyes on these three players and others as they hope to add to their core another young player with star potential. Let's run down the big Saturday in college hoops action.

Parker pops off against UNC

Duke forward Jabari Parker scored a season-high 30 points and hauled in 11 boards as his Blue Devils held off the Tar Heels, 93-81, at Cameron Indoor Stadium. Both of those figures represented game-highs in the latest installment of one of American sports' best rivalries.

Parker shot 10-of-17 from the floor, 2-of-4 on threes, and 8-of-9 from the foul line Saturday. In his freshman season, the Chicago native is averaging 19.1 points and nine rebounds per game on 57.9 percent True Shooting. He may not have a clear position at the NBA level, but if he continues to produce big numbers at an efficient clip, that uncertainty may not matter. 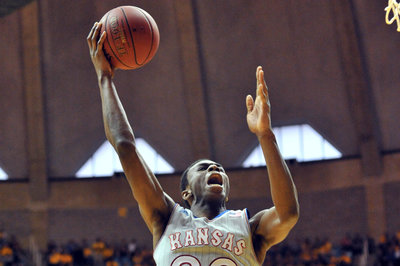 Wiggins, who has drawn comparisons to the likes of Tracy McGrady and Paul George due to his athletic ability and the ease with which he scores, raised his scoring average to 16.8 points with his performance Saturday. The 6-foot-8 swingman also averages 5.9 rebounds, 1.6 assists, and 1.2 steals and owns a True Shooting mark of 57.6 percent.

It's unclear if Orlando will pick highly enough in June to land the much-hyped Wiggins, but there's no question that he'd fit nicely on a team in need of athleticism and perimeter scoring.

Not to be outdone, Creighton forward Doug McDermott tallied 45 points on 17-of-25 shooting from the field, including 5-of-7 shooting from beyond the arc, as the Bluejays topped Providence by an 88-73 final. He became the eighth player in Division I history to cross the 3000-point threshold, and he did so dramatically, given that Saturday marked Senior Night for Creighton.

McDermott doesn't rank as highly on Draft boards as either Parker or Wiggins, given his inferior athleticism and relatively advanced age, but he still projects as a lottery pick who could be in play for the Magic's WoNK selection. He now averages 26.5 points per game on 65 percent True Shooting.

While acknowledging that plenty can change through the course of the NCAA Tournament and the pre-Draft evaluation process, it's not too early to begin discussing these prospects and others. Notably, some recent mock Drafts have pegged Orlando as selecting each of Saturday's top performers: Basketball Insiders has the Magic taking Parker third, and in January ESPN Insider projected Orlando would choose Wiggins second and McDermott fourteenth.