The NBA announced Wednesday that Victor Oladipo earned Eastern Conference Rookie of the Month honors for his performance in February. In 12 appearances, including six starts, the Orlando Magic guard averaged 14.7 points, 4.4 rebounds, 4.9 assists, and 1.9 steals as Orlando went 5-7 on the month. The award win is Oladipo's second of the season, having previously earned top East rookie honors in December. 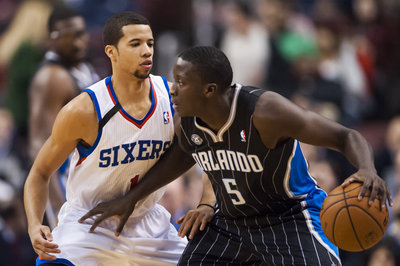 Fans ought to direct their attention to the two Rookie of the Year favorites' performance, not what it augurs for their award chances.

In the East, the other finalists for the monthly honor were Philadelphia 76ers point guard Michael Carter-Williams (16.7 points, 4.7 rebounds, 4.6 assists, and one steal per game) and New York Knicks swingman Tim Hardaway Jr. (12.1 points and 2.1 rebounds). Carter-Williams earned Rookie of the Month honors for November and January.