The split between the Orlando Magic and Glen Davis was inarguably best for both sides. Orlando had its eye well on the future and Davis' presence was nothing but a strain to player development and of the organization's core values. Davis now gets to spend time in a small-usage role as a reserve big on a championship contender, while the Magic get to distribute his minutes and shot attempts to younger players who figure to play a bigger part in Orlando's future.

Tobias Harris has relished the spotlight in the six games since Davis' departure. He's averaging 20.8 points, six rebounds, and 6.2 free-throw attempts per game on 64.2 percent True Shooting. He's also sporting a 1.2 assist-to-turnover ratio, a perfectly acceptable number for a starting power forward. That he's maintaining incredible efficiency while using up 23.1 percent of Orlando's possessions speaks to the groove that the former Tennessee Volunteer is currently enjoying. 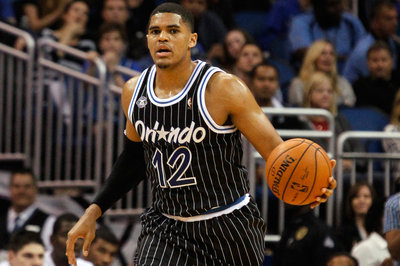 A year after acquiring him via trade, Orlando is still searching for the role which best suits the third-year forward.

But Harris hasn't played this well all season: prior to the All-Star Break, he was averaging a little less than 14 points per game. He was also shooting under 20 percent from behind the arc, and he registered a True Shooting number (50.7 percent) that was a few points below league average. Curiously, his usage rate of 21.2 before Davis' departure wasn't all that different; he just wasn't shooting the ball well from really anywhere on the floor. His individual counting stats improved in January, mostly while Nikola Vucevic was injured, but he still didn't score with the efficiency that many observers expected.

His efficiency has changed as of late; but how? Well, the answer is simple, really: Harris is a much better scorer, a much more deadly offensive weapon, and a better overall basketball player at power forward. At small forward alongside Davis and Vucevic, the floor was cramped for space, killing driving lanes and really deterring one of his biggest strengths: the ability to blow past bigger, slower defenders. Prior to Davis' departure, nearly 22 percent of Harris' shots came from behind the arc. That number has dropped below 10 percent in these last six games. In other words, Harris is attacking more, thanks to this newfound floor spacing as well as the advantage he holds against most traditional power forwards.

That development bodes well for the Magic since Harris is at his best when he's bullying his way towards the cup rather than settling for jumpers. And it's not that he's able to drive only against big, slow-footed power forwards. Watch him attack Thaddeus Young, a long, athletic, and versatile defender, on this closeout:

Vucevic seals off the help defender and Victor Oladipo is just good enough to warrant attention in the corner. Orlando lacked that spacing with Harris alongside Davis, but has it now.

Another advantage that Harris has against power forwards: he often beats them down the floor for easy buckets. He loves getting out and running, whether he's taking a long rebound and pushing the ball himself or simply zipping down a wing, looking for an outlet pass from a teammate on the break. Here he is filling the lane and outpacing all of the New York Knicks.

He's also capable of catching the ball near midcourt and attacking the rim from there. Here he is, taking an off-balance Amir Johnson to the basket:

None of this should really come as a surprise, though. When Harris broke out in the 2012/13 season, it was filling in for an injured Davis at power forward. That's why the Magic's rotation was in such a crunch with Davis back and healthy for the majority of 2013/14: it put Harris in an awkward spot at small forward and it jammed up Orlando's frontcourt rotation. Buying out Davis settled that issue, and Harris has taken full advantage of his new, yet familiar, situation.