Through 62 games at the NBA level, Victor Oladipo has already logged as many minutes for the Orlando Magic--1982, to be precise--as he did in his final two seasons at Indiana. The Maryland native also competed in the Orlando Pro Summer League in July and also took part in two events at NBA All-Star Weekend. Despite his heavy workload--his minutes total leads the team, and he's the only Magic player to appear in each of the team's 62 games--Orlando's stud guard is ready to tackle the rest of the schedule. 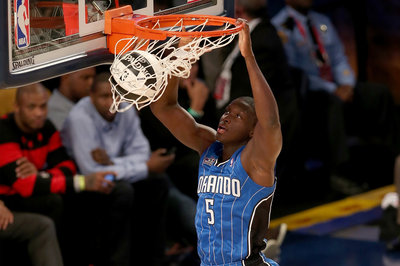 "I'm fresh, man," Oladipo said Sunday following the Magic's win against the Philadelphia 76ers. "There's only, what, 20 games left? I'm just trying to play hard in all 20. I can't control the outcomes, but I can definitely control how hard I play. So I'm just gonna go out and play hard on both ends of the floor [for] all 20 games."

Oladipo's relentless style of play on both sides of the ball taxes his body, and he said at All-Star Weekend that the length of the NBA season is "a toll." His comments Sunday indicate a willingness to fight through the stress of the NBA season, however.

During Sunday's game, Oladipo crashed into a videographer seated along the baseline, bumping the back of his head in the process. He stayed in the game despite the pain, but the rookie said that tumble highlighted an area of his game he intends to improve going forward.

"I just gotta do a better job in the offseason of learning how to land," he said. "I bet that sounds crazy but I don't do a good job of that."

In the meantime, Oladipo will try to stick the landing as his first NBA season draws to a close. He wants to "finish strong," he said, and he'll endeavor to accomplish that task by going the only way he knows how: