Just hours before UCLA and Oregon tipped off on Thursday, UCLA announced that it suspended Kyle Anderson and Jordan Adams for violating team conduct. Their suspensions put the Bruins--and more specifically, freshman guard Zach LaVine--in a peculiar situation because Anderson and Adams are such fundamental parts of what UCLA wants to do on offense. But their absences provided a forum to watch LaVine, a very fine NBA prospect, work as a starter and primary ballhandler.

The Bruins lost, 87-83, in overtime and LaVine finished with 18 points, eight rebounds, five assists, and no turnovers on 7-of-17 shooting. My partner in crime, Sam Vecenie, and I talked about the game via e-mail. Sam provided some really awesome .gifs. This is our conversation. 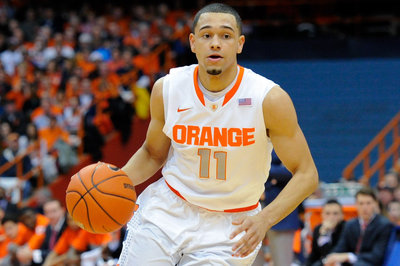 So we need to talk about Zach LaVine. We've mentioned him a number of times throughout the year, but with the UCLA game Thursday, it's time we talk more.

Kyle Anderson and Jordan Adams--two very good prospects in their own right--we're suspended, leaving LaVine practically alone against Oregon. This gave us a good chance to see what he could do for himself. Let's start broad: what did you think?

Sam Vecenie: By simply looking at his numbers, you would come away somewhat unimpressed with his performance. He ended up with a 18/8/5 line on 17 shots and only 1-of-5 from three in 48 minutes of play. But he showed off some specific skills during this game that he hasn't gotten a chance to this season sharing the ball with the three A's (Adams, Bryce Alford, and Anderson).

I do think he's definitely an off guard, but he did show off impressive skill getting the rim and creating his own offense. We knew how extraordinarily athletic he was before this game, but he also showed off a better change of direction than he's been able to in the halfcourt at any other point this year. That shiftiness will prove essential as he continues to develop with the ball. Plus, he has a smooth, quick release that is true from range, despite his numbers showing otherwise. The biggest thing he needs to fix there is his slight tendency to fade away when the situation doesn't call for it.

I'll also mention this: he showed me a lot more ability and vision in the pick-and-roll than I thought he had at this point. Here's an example:

He comes off the screen and gets past the initial defender with his quickness, then makes the perfect, precise pass through the pocket between the guard and big defenders. Another big thing he does here is bring Travis Wear to the 15-foot area, a place where he's much more comfortable shooting. A really strong pass.

Here's another example from the end of the half where instead of simply thinking about creating offense for himself, he keeps his head up and finds the baseline cutter:

I'm not saying I didn't think he would eventually develop these skills, but I'm just surprised that they're there already. He also took excellent care of the ball considering his usage for the game, with zero turnovers. While the numbers ended up not looking great, the process was impressive to me. What did you think?

Tyler: He did a little better than I expected as a primary ballhandler. His handle is tighter than I originally thought and he showed off several different, advanced dribble moves that allowed him to get to the rim. That's a really good sign, especially since it indicates that he's capable of being more than just an athletic, spot up shooter. That he's showing that handle off already speaks to how high his ceiling probably is.

He's also a better passer than I anticipated. He's never really had to create for others because that's basically Kyle Anderson's job, but he really did a nice job of setting teammates up. I recall other passes he made to shooters who missed open jumpers. It's possible that his assist total could have realistically been near eight or nine if his guys made shots.

That second .gif demonstrates advanced skill. He uses a double move to set up the defender into the screener. He then avoids telegraphing the pass, as the way the help defender completely misses the back cut suggests. He then makes the perfect pass leading to a bucket. That's an advanced move for someone who isn't pegged as a playmaker for others.

What I don't understand--and maybe you can help me out here--is how he rarely gets to the free throw line. That makes sense when Adams and Anderson are on the floor, but I kind of expected him to get to the stripe more often Thursday. He got there three times and hit all three attempts, but it seems if he can get to the rim that easily and if he's that athletic, he'd get fouled at the bucket more often. I'm missing something here, aren't I?

Sam: Wow, you just set that right up for me. The next thing I wanted to talk about with LaVine is his finishing ability around the hoop and rim. You would think that a guy like him would be able to get to the line a ton. He's all arms and legs, and there are a ton of ways to foul him just due to length.

But he's not nearly strong enough yet to absorb contact, and I think he has realized it. He tends to fade away from the rim instead of cutting in a direct motion. Here's an example of him fading on a pretty much wide open rim as soon as he sees a potential defender rotate:

There's not really a reason there for him to not make a direct line for the hoop, but he ends up fading backwards and ends up slightly off balance, leading to a more difficult shot which he misses. Experience is the biggest thing that will help him learn to go to the hoop stronger. The problem here is that he's simply not actually strong enough to absorb contact and finish yet. This is one of the main reasons that he probably should stay in college for one more season. He'll get stronger, then can actually practice finishing at the rim against collegiate competition. Even on his better layups where he attacks in a straight line with confidence, he's still going away from contact. Here's another example of that:

He attacks in a straight, confident line and uses english on the ball to put it in the hoop, but it's still going away from the defender. This attack was strong and successful, but his lack of physical strength still manifests itself there. He doesn't finish well at all in traffic, and the numbers bear that out. He's at 57 percent at the rim this season, despite getting a ton of easy transition dunks and layups from Adams and his own steals in that 2-3 zone defense.

Tyler: You know what? I may have found a perfect comparison. He's like if Archie Goodwin was a really good shooter: The physical tools are all there, but he hasn't yet put them all together. That's totally fine now, because he's 18 years old and his potential trajectory is right up there with any good NBA shooting guard, but there are issues he needs to fix.

That said, I'd take him in that 15-20 range, about where I'd take his teammate Anderson. The athleticism is out of this world and he can shoot the lights out, though that has cooled off a little lately. There just aren't that many guys out there who combine a shooting stroke with speed, length and that vertical leap. He's a little like Terrence Ross in that sense, though Ross had more opportunities in college.

But there's a pretty good chance he sticks around another year, right? If he comes back and is one of the two or three best guys in the Pac-12 then he's a surefire top-10 pick. This year, barring a crazy and late awesome stretch of games, he's probably not nudging into that top-10 range. You've said it before, but he's probably better off staying another year in college. How high can he realistically go next year?

Zach LaVine has the beautiful three-point stroke, the long strides, pretty much everything you'd need to be a star in the NBA. Sam Vecenie

Sam: Right now, for me, the best comparison is Gerald Green. He's long, exceptionally athletic in the open floor, but isn't nearly ready to even compete physically in the NBA. He has the beautiful three-point stroke, the long strides, pretty much everything you'd need to be a star in the NBA. I think he has a lot more basketball sense than Green does, but the same concerns apply to him as did Green at this age. And most of them revolve around his defense.

I would get you .gifs of his defense, but it's not really even worth it. He just legitimately has no idea where to be and when to help in a man scheme, and that's if they're playing man at that time. They go back and forth between that and a 2-3 zone, especially when he's in the game. Now, the zone has transition benefits with both he and Adams lurking in passing lanes, but the things he's doing now aren't remotely translatable to NBA defensive schemes. If you stuck him in the NBA tomorrow, he'd be immediately sent down to the D-League because he just can't at all compete on that end right now.

Having just destroyed that part of his game though, I'd absolutely still take him top-20. I could even be convinced when it's all said and done for him to be a lottery pick. His high end potential is that great, and I don't love the middle of this class. His offensive basketball IQ and vision with the ball are already strong and his athleticism is off the charts. If he can come back and put that all together next season, there's a chance he's my number-one guard for the 2015 Draft. But next season, for a lot of the same reasons that Jeremy Lamb was there for a year, he would be in the D-League.

I like his demeanor a lot more than Lamb's on the ball, for what it's worth. He looks to attack with a greater sense of urgency than Lamb ever did, even if sometimes it ends up being plan-less.

So long story short, I call myself a fan of Zach LaVine, but have some very real and very palpable concerns about his game if he declares after this season.

Tyler: I'm a fan, too. I don't think there's any way he translates to the NBA as a point guard like some people have suggested, but I like him a lot as an off-the-ball shooter and secondary ballhandler.

We should also note that there's a lot of room for improvement with his defense because, well, he's just so athletic. He has the length and speed to defend both guard positions, but the awareness just isn't quite there yet. Either way, he's a first-round pick in the Draft and one who, if developed properly, could blossom in the NBA.