The Magic's outstanding defense in the fourth quarter and overtime fueled their come-from-behind win Friday.

The Orlando Magic started a new winning streak Friday with their 110-105 overtime win over the visiting Charlotte Bobcats. Orlando swingman Arron Afflalo drained a three-pointer with 7.4 seconds remaining in regulation to force the extra frame, and then Jameer Nelson gave Orlando the lead for good at the 2:26 mark of overtime.

Though those buckets from Orlando's starting backcourt proved key in the victory, Nik Vučević catalyzed it with his work in the paint and on the glass. The seven-foot center scored 24 points and hauled in 23 rebounds for his sixth 20-20 game since joining Orlando prior to the 2012/13 season, and the Bobcats simply had no answer for him. Thanks in part to his efforts, the Magic commanded a 57-36 edge on the glass and held a 20-14 advantage on second-chance points.

No Magic formula on D

The Bobcats aren't an offensive powerhouse, ranking 23rd in points-per-possession entering their matchup with the Magic, but they nonetheless notched 81 points in the first three periods against Orlando. They did so by shooting 50 percent from the floor and from three-point range, with only six turnovers. The Magic simply couldn't take any of Charlotte's options away. Josh McRoberts, the versatile power forward, played exceptionally on Friday, with 24 points, seven rebounds and six assists in 35 minutes, and his work out of the high post as a screener, pop option for three-pointers, and facilitator proved tricky for the Magic.

But Orlando rallied back into the game on the strength of its defense: in the fourth quarter and overtime, the Magic limited their Southeast rivals to 24 points on 10-of-31 shooting, with four turnovers leading to seven Orlando points. Moreover, the Magic snared 20 of a possible 32 rebounds, limiting the Bobcats' possessions.

It might be appealing to think that Orlando made a special adjustment to cool Charlotte's offense over the game's final 17 minutes, but that simply wasn't the case.

"There really was no adjustment. Coach had the same gameplan from the start of the game and we committed to it." Kyle O'Quinn on Orlando's defense in the fourth quarter and overtime

"There really was no adjustment," said Magic big man Kyle O'Quinn, who tallied 13 points, seven rebounds, three assists, and two blocks in another solid performance as a starter. "Coach had the same gameplan from the start of the game and we committed to it." Specifically, the second-year player highlighted Vučević's work defending Al Jefferson in the post and Afflalo's effort to contain the Bobcats in the pick-and-roll.

"He's a good player," said Vučević of Jefferson, who finished the night with 20 points on 10-of-16 shooting. "I'm not going to limit him to zero points; obviously, he's gonna score. But I tried to do my best, tried to keep him away from the paint as much as I can, and the guards did a great job of helping me." Jefferson attempted only four shots in the fourth quarter and overtime, which fact attests to the excellence with which Vučević denied him the ball.

One almost got the impression that the Magic flipped a switch of some kind to become more effective defensively. O'Quinn said the pressure situation fueled his team.

"You just don't wanna lose," said O'Quinn. "So when you see the clock running down, you know it's winning time."

"Just doing a great job of helping each other and being there for each other and rotating. You know, the little things," he said. "I think when we do that we're definitely effective."

As one might imagine in the wake of his 24-point, 23-rebound night, Vučević drew rave reviews from his teammates following the Magic's victory.

"He goes out there and he goes after boards," said Orlando forward Tobias Harris. "That's what he does best and tonight you saw that firsthand."

Oladipo offered a similar assessment. "He definitely does a great job of using his length and his strength to get rebounds for us," he said. 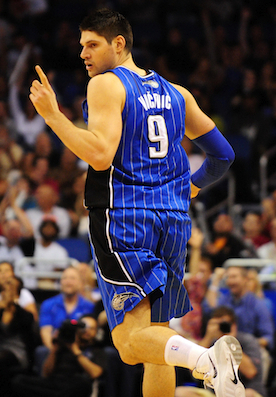 Bobcats shooting guard Gerald Henderson also had words of praise for Orlando's young center. "He is tough. He is just a big guy and has a big base on him," he said.

Vučević's big night started slowly: he missed 10 of his 14 shots before intermission, but he--like his team--rallied back to form, as he made seven of his final eight shots from the floor. Each of his three fourth-quarter buckets mattered in a huge way: his first knotted the score at 89 with 5:14 to play, and his 15-foot jumper off a Nelson feed on Orlando's next trip gave the home team its first lead of the game. Two possessions later, he fired in another jumper to give the Magic another two-point lead.

"I started the game off kind of slow offensively, but felt pretty good because I was able to rebound and was pretty active defensively," Vučević said. "I knew at some point I'd turn it around, make some shots, and I knew I got some easy ones and started feeling better."

Unlike his individual offense, Vučević's rebounding stayed with him the whole game: he hauled in 16 of his 23 boards before halftime, matching the Bobcats' entire team total. "There's really no specific reason for it," the Montenegrin said when asked to pinpoint how he dominated the glass. "Just got aggressive to the board, just try to grab them, and the ball was coming my way."

The Magic did more than merely exceed their 2012/13 win total with their victory Friday: they also notched the 1000th regular-season win in franchise history.

The Magic announced Friday that they'll host a free basketball clinic at Orlando Fashion Square on Saturday from 1-3 PM. In addition to tipping off NBA Green Week, the clinic serves as a platform for Fashion Square to announce its new sustainability initiatives and recycling program.

Stuff and the Magic Dancers will attend the clinic, and guests could win prizes including tickets to future Magic games.

Guests are encouraged to bring personal electronics to recycle.