How Glen Davis' departure has shaken up the Orlando Magic's rotation

Orlando cut ties with the veteran big man after the trading deadline. Here's a look at who's benefitted from the playing time his departure opened up.

Share All sharing options for: How Glen Davis' departure has shaken up the Orlando Magic's rotation

Friday marks five weeks since the Orlando Magic waived Glen Davis. The move enabled Davis to sign with a championship contender--he ultimately landed with the Los Angeles Clippers, for whom he's averaged 3.6 points and 2.5 rebounds in a limited role--and also opened up his 30.1 minutes per game to Orlando's younger players at the power positions.

No baby on board 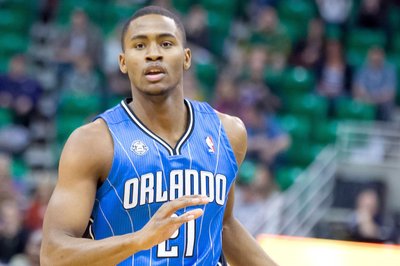 Here's a look at how Big Baby's departure has affected the playing time of some key Magic players.

Orlando Pinstriped Post wanted to check in on the Magic's playing time since Davis' departure. Andrew Nicholson's situation ranks first among the surprises: the second-year big man has seen his playing time drop from 15.8 minutes per game with Davis to 12.2 without him, despite all that playing time becoming available. As Tyler Lashbrook explored on Ty Tuesday, Nicholson's played unevenly in his sophomore NBA campaign, so one can easily understand that he doesn't play a major role with the team, but the conventional wisdom at the time of Davis' ouster held that Nicholson would get more chances, not less, to prove his mettle.

Naturally, someone has to benefit from the void Davis left, but Nicholson hasn't to date. Instead, Maurice Harkless has proven the biggest beneficiary, and he doesn't even play Davis' position. The second-year small forward has moved into the starting lineup and seen his average workload increase to 31.9 minutes a night, an increase of 10.8 minutes, or 50.9 percent. To his credit, the St. John's product has made the most of that new opportunity, showing a strong increase in three-point shooting percentage (from 36.6 to 39.6) and a moderate one in per-minute scoring (from 10.9 points per 36 to 11.1).

Kyle O'Quinn has taken over at starting power forward, the role Davis once occupied, in Orlando's last nine games, and since Davis left, he's logged 21.4 minutes per night, up from 14 when Davis still played for Orlando. The move hasn't dramatically altered O'Quinn's per-minute productivity, but has enabled him more opportunities to excel at the facets of the game--rebounding, defending, setting screens, passing from the high post--in which he's most proficient. Increasing his workload ought to pay dividends in the long run as Orlando continues to develop the former Norfolk State standout. 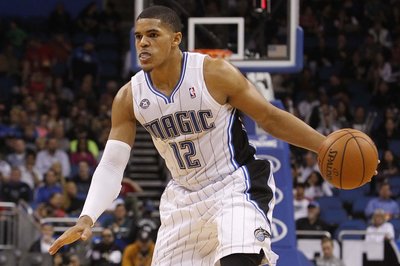 The Magic's buyout of Davis has freed Harris to log significant time at power forward, his best position.

And while Tobias Harris' playing time has dipped slightly--from 32.3 minutes per game with Davis to 29.3 minutes without him--he's arguably never been more productive. A significant uptick in field-goal percentage (from 43 percent to 51.5) has enabled him to become a more lethal scorer, as he leads the team with 21.5 points per 36 minutes since Davis moved on. While his season-long struggles from beyond the arc have continued, he's attempting fewer treys and instead focusing on driving to the basket more. One could make a case for his starting at small forward over Harkless, given his superior productivity, but this reserve role appears to suit him just fine.

To give Orlando another option at power forward and center, the team inked rookie big man Dewayne Dedmon to the first of two 10-day deals shortly after waiving Davis and then elected to keep him for the balance of the season. The USC product has excelled in limited minutes, shooting 75 percent from the floor in seven brief appearances in pinstripes. The 24-year-old projects as a solid defensive presence due to his length, athleticism, and shot-blocking instincts, and could grow into a larger role as the Magic's season winds to a close.

The ripples from Orlando's waiving Davis haven't manifested quite the way one might have expected, but it's difficult to argue with the results, particularly as they pertain to O'Quinn and Harris. There ought to be no question that the Magic made the right move. And if, over the course of the rest of their games, they can find a way to get Nicholson out of the rut in which he's been mired, the move will have worked out even better.