The young power forward has regressed in his second season. Tyler Lashbrook breaks down whats wrong in this week's Ty Tuesday.

I sat in the middle of Bankers Life Fieldhouse's press row at the first NBA game I ever covered in person and watched Andrew Nicholson score 18 first-half points on nine shots against, by far, the NBA's best defense. There were hardly any words to describe those 13 minutes. The Orlando Magic power forward showed off everything in his arsenal: a fluid mid-range jumper, a deft and mature low post game, and even a corner three, an added wrinkle that he reportedly added over the summer.

Indiana Pacers fans sat silently as this no-name from St. Boneventure tore to shreds the very defense that pushed the two-time defending champion Miami Heat to a Game Seven in the Eastern Conference Finals fewer than five months before. He was big and slow and this was the team that was going to pester the mighty Heat all season. But then something happened: After breathing life into a predictably stagnant and inefficient Magic offense for 13 minutes, Nicholson didn't touch the floor in the third quarter. He played almost seven minutes in the fourth quarter, but he lost his rhythm and finished the game with the same 18 points he scored in the first half.

I left that night thinking that Nicholson was Orlando's best scorer and that he would be the right guy to start at power forward. I, like most people in Magic talking circles, thought that his newfound three-point range was his ticket to a second NBA contract. But the second year forward has hit a strange bump in his development and his numbers--all of them--and his minutes have decreased accordingly.

Here are Nicholson's per-36 minute numbers from November-February:

Since the new year, Nicholson has scored in double-digits just once, coincidentally on Jan. 2, when he knotted 12 points. He's earned five Did Not Plays-Coach's Decisions and has played fewer than 10 minutes another 14 times. In January and February, his True Shooting was in the 30s and in March it's 48.4 percent, well below league average.

So what changed from last year--when he ended as the team's most efficient scorer with a True Shooting of 55.7--to this year? The answer is simple: He's shooting three triples per 36 minutes when last season he didn't attempt a single one. It's at this time of the season that Nicholson needs to abandon the three-point shot in order to park himself where he's most comfortable--under the basket.

On the surface, it seemed like Nicholson adding another dimension to his game would work wonders. He could serve as a floor-stretching four man for an offense that desperately needed long range shooting. Camping in the corners, Nicholson could become an outlet to a frequently stalled offense. The problem: He isn't shoot threes at a clip that makes it all work. 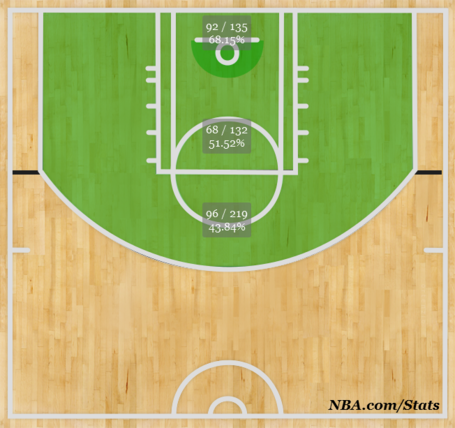 That's a beautiful green prairie of efficient shooting. Now, consider what's happened in 2013/14, when Nicholson stretched his game behind the arc: 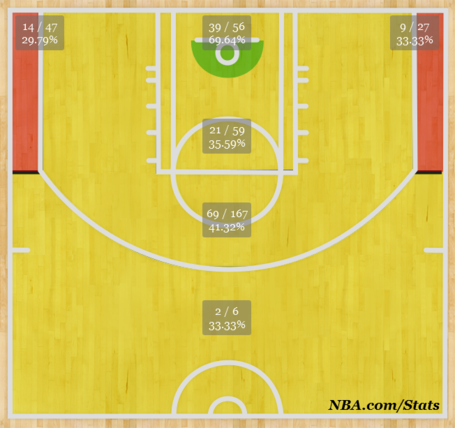 Nicholson's midrange game hasn't really dipped that much (two percent), but he's considerably worse (almost 15 percent!) from the non-restricted paint area and he's dreadful from the corners. Ironically, he's actually been slightly better inside the restricted area this season, though that might level out with a larger sample size.

The most troubling part about Nicholson's second season is that Nicholson has nearly abandoned where he's most efficient. 28 percent of his shots came from the restricted area as a rookie; that number's down to 15 percent in 2013/14. 27 percent of his shots in 2012/13 came from the non-restricted paint area, but that number is down to 16 percent. I'd be willing to bet that if he were to shoot more from the paint, that 36 percent field-goal mark would rise steadily to the green again.

The corner three is notably one of the most efficient spots on the floor, but it's a difficult spot to pick up, especially if you didn't take a single shot from there the prior season. Orlando's trying to add that shot to Nicholson's arsenal makes sense: it's a great area to space the floor and Nicholson, with his soft shooting touch, figured to translate into a nice corner shooter. But it hasn't worked and it's turned the second-year forward from a potentially deadly offensive weapon to a fringe NBA player. Nicholson needs to return where he's comfortable, under the basket, if he wants to rediscover the efficiency with which he scored in his rookie season.

The weak side of Orlando's defense

Most NBA teams play a strong-side hybrid zone in which players not directly involved in ball action shade over to the middle of the floor. Those players on the help side basically shrink one side of the floor, condensing space for the offense to move and cutting off paths to the lane. But few teams have the back-side defender shade as far into the lane as the Magic do.

This helps fill in for Orlando's lack of an elite rim protector. Nikola Vucevic has made tremendous improvements in containing ball handlers in the Magic's drop-back pick-and-roll scheme, but he isn't yet ready to protect the rim by himself like the league's top big man defenders do. Thus, the Magic have their guys sink really far into the lane in order to stop the roll man on pick-and-rolls.

Against the Utah Jazz on Saturday, that exaggerated defense was the Magic's downfall. Two possession before Trey Burke's eventual game-winner, Richard Jefferson--shooting 49 percent from the corners in 2013/14--got a wide-open look off pick-and-roll action involving Gordon Hayward and Derrick Favors. Notice how far Maurice Harkless digs down: 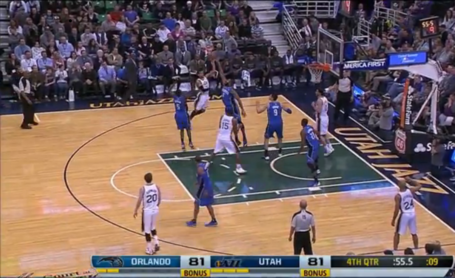 The ball is tipped in the air thanks to Kyle O'Quinn's mammoth limbs, but Harkless is still too far to full recover to Jefferson: 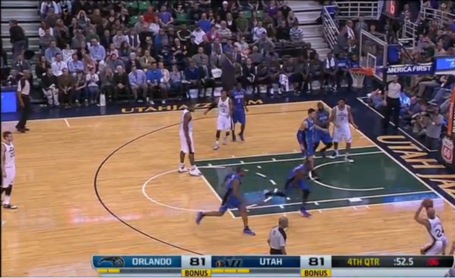 The shot didn't go in, but it should have and it would have changed the entire dynamic of the final minute of the game. On Burke's game-winner, Victor Oladipo dug all the way to the restricted area to cut off the dump-off pass and Hayward found his open shooter. Oladipo was quick enough to get a decent contest, but if he had played a few feet further from where he was, Burke may not have even got a shot off. It's a dangerous but deliberate style of defense that the Magic have to live with until Vucevic can better patrol the paint himself or Orlando finds a shot blocker to pair with him.