A look at the Orlando Magic's passing

With the aid of SportVU technology, NBA.com dishes on how each NBA team moves the ball.

Share All sharing options for: A look at the Orlando Magic's passing

On Wednesday, Andrew Bergmann of NBA.com posted a graphic highlighting how various NBA teams' starting units pass the ball, using grey lines to connect two players, with the thickness of those lines indicating the frequency with which those players pass one another the ball during the course of a game. Bergmann based the information on data gleaned from SportVU technology, which tracks the position of players, referees, and the ball in every NBA arena for every game in the 2013/14 season. 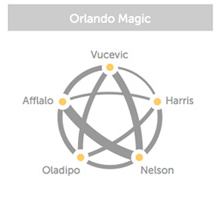 Bergmann's Magic graphic highlights Jameer Nelson, Victor Oladipo, Arron Afflalo, Tobias Harris, and Nik Vučević. The lines connecting each of the players in this group are, with some exception, fairly thick, which fact attests to how key ball movement is to Orlando's offensive attack; without a consistent one-on-one scorer, the Magic have to ping the ball around in order to create easy shot attempts.

It is curious to see the thinness of the lines connecting Harris to his Magic teammates, particularly Vučević: one would think that those two young big men would collaborate more often.

To supplement Bergmann's graphic--which, it's important to remember, measures all passes, not simply assists--we put together this table measuring the total number of assists Magic players have recorded to one another.

It ought not come as a surprise to see that Nelson-to-Afflalo assists rank number-one here, given that Nelson leads the team in assists and Afflalo in both points and shot attempts. Nonetheless, it's heartening for Magic fans to know that the pair play off one another well: in the 1517 minutes Afflalo and Nelson have shared the floor, the Magic have posted an offensive rating of 102.2 and a True Shooting mark of 53.4 percent, according to NBA.com/stats. Both of those figures represent improvements over the team's overall numbers of 99.2 and 52.3 percent, respectively.

It's also interesting to see the connection between O'Quinn and Harkless; the latter's ability to cut backdoor coupled with the former's facility in playmaking out of the high post makes for a strong combination. In December, O'Quinn addressed how he developed his passing acumen.

Considering both Bergmann's graphic and the above table, what stands out at you the most?